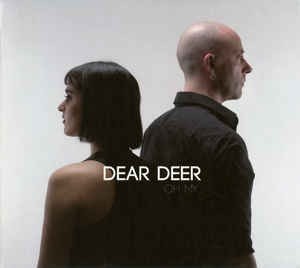 Background/Info: Dear Deer is a duo consisting of Federico Lovino (Popoï Sdioh) and Sabatel (Cheshire Cat, Guerre Froide). “Oh My” is their official debut album, which was released on vinyl format by Manic Depression Records and on CD by Swiss Dark Nights. “Oh My” reveals 9 songs.

Content: It only takes a few seconds to get an idea about the sources of inspiration for this band. Dead Deer mixes elements of post-punk and cold-wave together with a somewhat industrial-like input. On one side you’ll notice vintage electronics and on the other side a more classical cold-wave/post-punk sound, which might remind you of The Sisters Of Mercy and Bauhaus.

There’s also is a nice twist between the male and female vocals. Federico Lovino’s timbre of voice sometimes reminds me of Gavin Friday, which injects an extra 80s touch to the work.

+ + + : “Oh My” clearly doesn’t reinvent any music genre, but I like the way this band has mixed different 80s elements together. It sounds pretty old-styled, but still refreshing and featuring multiple remarkable songs. This is a cool work, which seems to reveal it is still possible to compose exciting music based on old receipts. “Statement”, “Claudine In Berlin” and “Clinical/Physical” featuring Loto Ball are really alluring cuts, which will for sure convince you of this band’s potential.

– – – : The main strength of an album often also is its major point that you can discuss. So Dear Deer clearly doesn’t reinvent anything and would maybe give you the impression discovering one of these numerous forgotten and lost 80s formations.

Conclusion: Who cares if a band is simply emulating an old-fashioned music genre. Dear Deer kicks ass and has accomplished a great piece of music, which I hope will be only the beginning. You guys rocks!

Since you’re here … … we have a small favour to ask. More people are reading Side-Line Magazine than ever but advertising revenues across the media are falling fast. And unlike many news organisations, we haven’t put up a paywall – we want to keep our journalism as open as we can. So you can see why we need to ask for your help. Side-Line’s independent journalism takes a lot of time, money and hard work to produce. But we do it because we want to push the artists we like and who are equally fighting to survive. If everyone who reads our reporting, who likes it, helps fund it, our future would be much more secure. For as little as 5 US$, you can support Side-Line Magazine – and it only takes a minute. Thank you. The donations are safely powered by Paypal.
Tags: Dear Deer, Sabatel