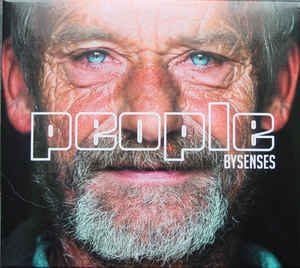 Background/Info: BySenSes is a Belgian solo-project driven by Didier Dewachtere. He self-released a debut full length in 2014 and now joined Wool-E Discs for a new chapter in the Belgian NeuMusik series devoted to ambient music from Belgium.

Content: “People” is totally ambient-like for the imaginary invitation to embark on a long sonic trip through countries that don’t exist. It’s a voyage on, which you’ll cross deep resonating bass lines, slow tempo rhythms, evasive string parts and even spoken vocal passages. There also is an experimental touch emerging from a few cuts, on which the artist must have used field recordings (or samplings). There also is a part of mystery emerging from some songs, like a spooky flavor joining this electronic prosperity.

The 2nd disc features 4 extra songs, which are in a similar vein although you here will discover a remix, an extended version of another track and 2 more cuts.

+ + + : “People” brings us back in time. Some of the electronic treatments and the global sound atmosphere are evoking early ambient pioneers, but I also noticed a kind of early Front 242 sound experiment merged with pure ambient music. The slow cadence makes the songs more accessible and still more captivating. This is ambient music to dream away on while sometimes getting close to IDM. I like the sophisticated sound treatments revealing great astral atmospheres and a few transcendental passages. The use of a few vocal lines makes the global production more accessible. Last, but not least I also like the artwork of this album featuring numerous little pictures of people faces. It reminds me a bit to the famous Italian photographer Oliviero Toscani.

Conclusion: This “Belgian NeuMusik” series has already revealed a few cool artists and BySenSeS is just one more we can add to the list. If you like electro-ambient with attitude you better can try “People”.