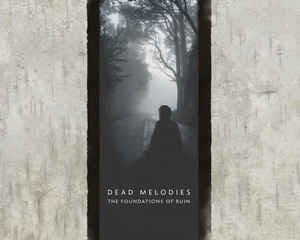 Background/Info: This is the fourth studio album for Tom Moore aka Dead Melodies. It also is his second opus released on Cryo Chamber while he also got featured at the “Tomb Of Druids”-compilation.

Content: The new songs reveal an interesting twist between usual and essential influences of dark-ambient music and a kind of folk/neo-classic input featured by acoustic guitar, piano and cello sounds. It creates a cinematographic aspect for an imaginary dark- or horror movie. The ‘classical’ passages are lost in a truly sonic mayhem from which are emerging monstrous electro blasts. Especially the last songs have been accentuated by this surprising ‘classical’ touch.

+ + + : I like the diversity of the work mixing traditional dark-ambient and soundscape elements with a kind of neo-classic approach. It brings some authenticity to the work and it’s definitely a sound formula that makes sense for accentuating        a truly artistic writing. It also creates a dark reverie, which is perfectly fitting for cinema purposes. The global atmosphere is not only horror-like, but also reflecting feelings of solitude and sorrow.

– – – : Don’t get me wrong, this a real cool opus, but I’m just missing a total climax to speak about a truly successful work.

Conclusion: Dead Melodies has realized on “The Foundations Of Ruin” a kind of imaginary ambient requiem or horror-chamber music for lonely souls.

Since you’re here … … we have a small favour to ask. More people are reading Side-Line Magazine than ever but advertising revenues across the media are falling fast. And unlike many news organisations, we haven’t put up a paywall – we want to keep our journalism as open as we can. So you can see why we need to ask for your help. Side-Line’s independent journalism takes a lot of time, money and hard work to produce. But we do it because we want to push the artists we like and who are equally fighting to survive. If everyone who reads our reporting, who likes it, helps fund it, our future would be much more secure. For as little as 5 US$, you can support Side-Line Magazine – and it only takes a minute. Thank you. The donations are safely powered by Paypal.
Tags: Dead Melodies, Mayhem