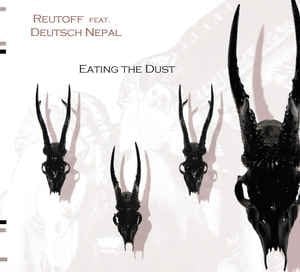 Background/Info:  “Eating The Dust” resulted from the common efforts between Russian industrial veteran project Reutoff and one of the Swedish dinos of death-industrial and dark-ambient music Deutsch Nepal. The album has been composed over 10 years. Reutoff took care for the music and Peter Andersson aka Lina Baby Doll wrote the lyrics and did the vocals.

Content: What can you expect when industrial veterans are working together? Right, an industrial release, but “Eating The Dust” is not exactly what I would call ‘industrial’. There’re for sure industrial sound treatments mixed with darker sound atmospheres, but the global production is more carried by electronic minimalism, refined crystalline bleeps and sequences and overwhelming cinematographic passages. You for sure will notice rougher elements such as bombastic arrangements and heavier industrial noises, but this is not a typical industrial release, but simply an electronic work composed by ‘industrialists’.

Peter Andersson is singing like never before. He’s not screaming like he often did on his Deutsch Nepal work. No, he’s simply singing a rather natural way. Notice by the way the last song is reworked version featuring the guitar of “Alcohology”, which is a song that got featured on the same-titled Deutsch Nepal album (2015).

+ + + : This album is a sort of challenge as you don’t exactly expect this kind of album featuring Reutoff and Deutsch Nepal. I think it’s the kind of work that wouldn’t have been possible twenty years ago. It clearly sounds as the fusion between artists in search of something different, something they never experienced with before. I like the result for the fusion between opposite sound elements and influences, but still for the atypical style, which is hard to define. Andersson also reveals to be a real singer so in the end I would say this is a totally surprising opus.

Conclusion: “Eating The Dust” is a fruitful collaboration between two projects, which have created something different from their usual work.