[By our Norwegian correspondent Jan Ronald Stange]
It’s not too often we get new and exiting electronic music from the western part of the American continent, so when the Los Angeles based electronic musician, visual artist and multi-instrumentalist WVM released his single “Sown” last week we had to check it out. 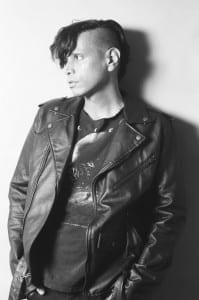 WVM: ‘Sown’ gets a lot of its inspiration from 80’s Bowie and Peter Gabriel with a lot of early Prince…. but mostly it’s just the music I want to hear, a lot of my heart and soul went into it, which is why it really doesn’t sound like any other artist other than me.

Is there a story behind the name?
WVM: The name WVM is a wavelength, everything in this reality is made of waves from the car you drive to the skin on your bones. What I love about these waves is that they can be molded into anything. The juxtaposition of the W and the M are intentional to remind me everything has it’s opposite. The letters can stand for anything you want, but it’s just WVM.

The premiere of the song was done as an interview/review on Huffington Post.

Since you’re here … … we have a small favour to ask. More people are reading Side-Line Magazine than ever but advertising revenues across the media are falling fast. And unlike many news organisations, we haven’t put up a paywall – we want to keep our journalism as open as we can. So you can see why we need to ask for your help. Side-Line’s independent journalism takes a lot of time, money and hard work to produce. But we do it because we want to push the artists we like and who are equally fighting to survive. If everyone who reads our reporting, who likes it, helps fund it, our future would be much more secure. For as little as 5 US$, you can support Side-Line Magazine – and it only takes a minute. Thank you. The donations are safely powered by Paypal.
Tags: Christoffer Berg, Depeche Mode, Fever Ray, Los Angeles, The Knife, wvm