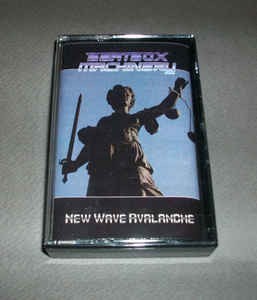 Background/Info: Behind this Greek project is hiding Toxic Razor who set up Beatbox Machinery in 2010 and who’s also the owner of the Werkstatt Recordings label. This band has released an impressive number of productions, but remains a rather unknown name. “New Wave Avalanche” rather looks like a mini-album instead of an EP. The work features 6 different cuts.

Content: After the rather EBM-minded, instrumental opening title song, the next cuts amix elements of EBM together with influences of electro-pop and even nu-disco sound effects. There clearly is a kind of retro sound emerging of the work, which might also remind me of early 90s productions. The songs are rather short, but diverse.

+ + + : Beatbox Machinery clearly doesn’t make any compromises, but composes the music they like. It’s a surprising mix between different music styles, but in the end you’ll notice certain passion for analogue sound treatments. The cool effects reminding me of disco music and other space sweeps are the little details reinforce the vintage approach to the work.

– – – : I’m missing some passion in the vocal parts, which are one of the few points that can’t totally convince me. The global sound production could have been more professional although it might have been voluntary to accentuate the unpolished 80s spirit.

Conclusion: “New Wave Avalanche” is an appropriated title to bring the 80s electronics back to life. Beat Box Machinery is one of the many devoted subjects to this legendary decade of underground music.