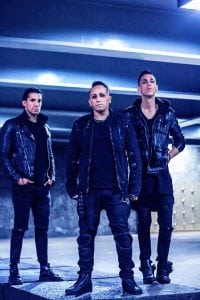 When Erk Aicrag set up Rabia Sorda in 2003 it all sounded as a side-project to his main band Hocico. The original dark-electronic sound progressively evolved from album to album. Fifteen years later Rabia Sorda released its fourth full length in history entitled “The World Ends Today” (Out Of Line). It’s without a shadow of a doubt the hardest and most enraged work ever. The band now consists of Erk Aicrag (vocals, lyrics, machines), Marcus Engel (guitars, keys, percussions) and Maxx (drums). Erk gave me more details about the work.

Q: The new album “The World Ends Today” is without a shadow of a doubt your darkest and hardest album ever. Tell us a bit more about this evolution in sound and darkness plus what has been the impact of the new band members?

Erk: Right from the beginning I was set out to create a furious and violent sound for this album. My band mate Marcus took the plunge and supported me to create “The World Ends Today” all the way long! Having Marcus and Maxx in the band has definitely made a great impact on Rabia Sorda’s music, they are wild, energetic and crazy too, It’s been refreshing to have them around for the last years.

Q: The new songs are bringing multiple influences together; from metal to industrial to dark-electronics and even punk. How do you explain this diversity and how did the writing and recording of the songs happened?

Erk: I have always been an eclectic music lover for the main part of my life so most of the music I enjoy will definitely find a place in Rabia Sorda’s songs. “The World Ends Today” is an album that at some point Rabia Sorda had to make, just angry, hard and fucking loud. I think a great album has to offer many facets of an artist and “The World Ends Today” has absolutely that.  I had a bunch of songs I had written over the past 3 years and as I showed them to Marcus he got excited and joined forces to bring this album to life.

We both made a great team and started meeting regularly in my studio and slowly started shaping the sound of “The World Ends Today”, we even wrote some songs from scratch together, later on Out Of Line hooked us up with Nils Lesser who did an extraordinary job mixing the album and gave it that extra punch you feel when you listen to it, overall the whole process was a very enriching and stimulating experience!

Q: It’s quiet interesting to see the evolution in sound and influences from your debut album “Métodos Del Caos” (2006) till “The World Ends Today”. It all feels a bit like two different bands! What means this project to you? And tell us a bit more about this artistic freedom and how do you see Rabia Sorda evolving?

Erk: Rabia Sorda’s sound has been evolving according to my personal artistic and sometimes obsessive needs. In this moment I need an aggressive guitar-driven sound and to scream as loud as possible to produce adrenaline! And I am very proud of how “The World Ends Today” came out, it matches the way Rabia Sorda really sounds in my head. I enjoy the artistic freedom that Rabia Sorda allows me to explore music and I am glad the first album sounds different than the last one, because I am a different person.

Q: Lyrical wise the new album is also filled with extremely dark themes while the vocals have been never that enraged. Tell us a bit more about this interest (maybe fascination) for the ‘evil side of life’ and what does it say about your own perception about life and humanity?

Erk: I definitely have a fascination for the dark side of life; I am Mexican and that seems to be part of our cultural DNA. I think you have to acknowledge the darkness inside of every human in order to fully enjoy life and there is no better way to do that than having the chance to be violent and furious inside an artistic environment. I think I am good at bringing out the rage and the fury of growing up in a Western modern society. I still want to write music that challenges me and challenges the fans, music that punches you and puts a smile on your face at the same time. Going through the process of writing songs keeps me well-balanced…

Q: “The World Ends Today” features great songs to play live! How do you look back at the latest concerts where you played the new tracks of the album and how would you describe Rabia Sorda on stage?

Erk: The energy of Rabia Sorda during a live concert is amazing, I am addicted to it, there is something really special going on while we three perform. We like to rehearse as much as possible to bring out the best we have on stage. The new songs are lots of fun to play live, We had the chance to play a handful of them in Berlin last May and the audience reaction to them was amazing, it felt fucking good!

One of the biggest motivations to write the songs has always been bringing them to a live performance situation, that is the authentic fun part of being in a band.

Q: Erk, how important is it for you as an artist to get involved with Rabia Sorda, which sounds definitely more ‘rock’n’roll’ than Hocico?

Erk: It is vital for me to have my own personal way to express myself through music. At the other hand it has been mind-blowing being part of Hocico for the last 25 years, so I am very happy being active with both. They offer me different experiences and make me feel complete at this moment and I am very proud of how both bands have been developing creatively through time, still going strong!