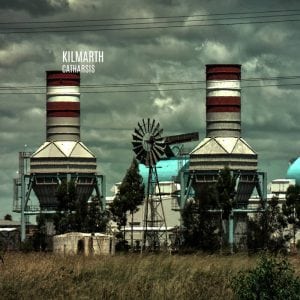 Background/Info: Kilmarth is a Belgian project set up in 2007 by Cédric Wattergniaux. After having released several songs at digital platforms and remixing a few bands, Kilmarth now unleashed this debut work featuring 6 tracks (on digital platforms) and one more cut on the limited CDR version. Cédric Wattergniaux has been a good-old colleague of mine in times he was also active (and this for 10 years) as a journalist for Side-Line.

Content: Cédric always has been an interesting guy to speak with about music and other subjects. A man with an open-minded spectrum and that’s rather rare in this music scene. So I wasn’t surprised at all to hear him experimenting with one of the most sophisticated formats of electronic music: IDM! His work is driven by broken rhythms, characterized by dark, deep tones, refined with bleeping sequences, sometimes achieved with a melodic touch, evolving into groovy passages and featuring noticeable studio effects while still featuring one track with saxophone play (played by a guest musician). The work remains instrumental and might appeal for lovers of labels such as Ant-zen, Tympanik Audio, Ad Nauseam, Mindtrick, M-Tronic and related labels.

+ + + : The deep, vibrating bass tones probably are the main characteristic of this mini-album, but I also have to mention the sophisticated drum patterns and other slow rhythms. Kilmarth is mixing different influences together; from dubstep to pure experimentalism to electro-ambient to electro-grooves. I like music that sounds as an invitation to make you dream away. “Catharsis” is definitely too dark to dream on, but it has something of a sonic travel. It’s a sophisticated production featuring noticeable cuts and one absolute attention grabber entitled “Shondell Discipline”. This track is more elaborated and has something dubby I really enjoy.

– – – : I can’t get away from the idea that this work was composed with very limited equipment. I hope Kilmarth can move on, but maybe with the magic of analogue-like gear, which I’m sure, would elevate the level of quality.

Conclusion: Belgium has been really been a main country when it comes to IDM so it’s quite exciting to discover a new talent experimenting with the most intelligent side of electronic-underground music.