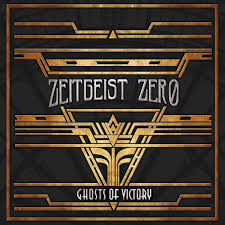 Content: Leeds based Zeitgeist Zero seems to have awakened from hibernation. The band remained pretty busy, but this is their first new album since 2008 (cf. “Dead To The World”). In 2012 they released the “Blackout”-EP, but since then nothing new really happened in the studio.

It has been never easy to qualify Zeitgeist Zero as one particular genre as this band covers many different influences, which often move in between gothic, rock and electronic. I dare to say that “Ghosts Of Victory” is somewhat more electro-minded when it comes to the arrangements. Globally speaking the songs are quite powerful and mainly driven by heavy guitar and dynamic drum sections. Singer Teresa Dead appears to be a gothic diva singing in a real passionate way. She’s the soul of the band and that’s an element, which is more explicit on this new release.

The songs are mixing rough and powerful passages together with delicate elements. Most of the choruses are into a dynamic explosion of drums and electro manipulations on top of the guitar playing. There’s a well-crafted balance between the different layers, which makes for the originality of the album.

Zeitgeist Zero clearly reveals a mature production and styled composition. From a pure technical point of view this work is absolutely successful. But a well-crafted and produced album also needs potential hits. I can’t say that the album is filled with hits, but it does have many cool songs. I’m referring to the energetic and gothic minded “The Jekyll In Me”, the more electro achieved “Don’t Pop My Bubble” and the delicate sounding “A Last Farewell” revealing a dense flavor of melancholia.

Zeitgeist Zero also tries to surprise their fans by the somewhat Rock-a-Billy inspired “Dust And Bone”, which also has something cabaret-like through the piano parts.

No real hits thus far till you discover “United In Black – Dance Or Die Mix”. This song was originally released on their last EP (cf. “Blackout”) and boosted to a great club version on this album. This song is more into a mix of cyber-goth and pop-rock influences. It was a great idea to put this song back on the album with a new mix.

“When The Lights Go Down” is another song from their EP, which has been mixed as a new version as well, but this “Bump ‘N’ Grind Mix” is not as successful.

Conclusion: Zeitgeist Zero has a unique style covering different dark musical grounds. There’s no real innovation at “Ghosts Of Victory”, but it’s a well-crafted and fully accomplished piece of work. This is a band with a strong image so they now only need a main hit to reach a wider (international) audience.