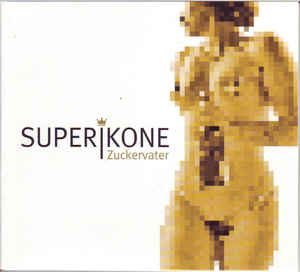 Background/Info: Malte Schmidt-Kohl is a German musician based in Cologne and who was previously involved in the excellent electro-pop sounding Lunastoy. Superikone was set up in 2003 and self-released a few productions. This new production is a kind of comeback after several years of silence. This EP features 10 songs.

Content: The main source of inspiration running through Superikone is electro-pop music. The main song “Zuckervater” has been featured in 4 different versions/remixes mixing the electro-pop basis together with other elements like EBM, future-pop, retro-like plus one remix by P24.

Among the other tracks the fans of the band will recognize the song “Energie” (originally released as EP-title song and still featured on the 2nd same-titled full length album). The song has been reworked into a future-pop mix.

Next to a few vintage-like cuts, the main attention grabber however is “1-2-3-Fear”, which is driven by a solid EBM bass line. This is for sure the hardest cut of the EP and is the most successful track.

All songs have been sung in German injecting this typical electro-body-pop flavor we’re used to hearing from German bands.

+ + + : “Zuckervater” clearly appears to be a hot and successful return for Superikone. The songs are well-crafted and revealing a great maturity. There’s a perfect balance between harder EBM components and catchy electro-pop arrangements. I also enjoy some of the vintage-like passages.

– – – : “Zuckervater” clearly appears the be the main song of the EP while the more EBM-driven “1-2-2-Fear” is without a shadow of a doubt the real hit of the EP. The single reproach I could imagine is that a few vocal parts could have been sung in a more passionate way.

Conclusion: Superikone took me by surprise delivering a refreshing –although not innovating, piece of diversified and danceable electro-pop music.