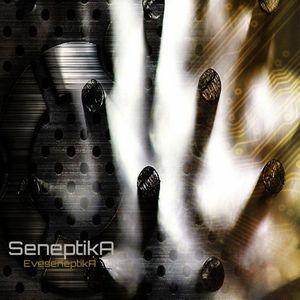 Content: I’ve never hide my fascination for Aliens Production, which remains one of the most visionary labels when it comes to discover new bands dealing with intelligent electronics. The Russian solo-project Seneptika is only one more name to add to the list.

This artist deals with an interesting mix of IDM-inspired sounds and space-driven electro-ambient music. “Eveseneptika” features 4 songs and 4 remixes. The opening cut directly reveals the poignant atmospheric and totally astral devoted sounds featuring sensual female moaning and whispering. The heavy vibrating vibes emerging at the surface sound like goose pimples music. The slow driven rhythm makes it fully accessible while given you the feeling to dream away throughout unexplored sonic continents.

And that’s just a warm-up as both upcoming songs reach a pure orgasmic level. Both songs reflect a similar vibrating sensation, the rhythm becomes more transcendental and the influences moving into IDM. The sound treatments are raw, sometimes a bit metallic-like while empowered by heavy blasting explosions. “Reboot Me” is a real masterpiece.

The last cut is similar and without a real climax. Nevertheless it again sounds like expressing the fascination of this young artist to create a unique sonic DNA based upon raw arrangements.

The next part features 4 remixes by other formations involved in the wider fields of IDM. Bands like TOD, ISH and Headdreamer are familiar names from the Aliens Production roster while RecFrag is maybe a little less known.

My personal favorites are the remixes by ISH and TOD. “Reboot Me” has been remixed by ISH in a judicious way by injecting an extra boost to the composition while the original piano-like passage brings some extra refinement. “Nostalgia Rzhavo” was remixed by TOD into a somewhat danceable approach while keeping the main ingredients of the song.

Headdreamer reworked “Reboot Me” into an evasive version while the same song has been remixed a more symphonic way by RecFrag.

Conclusion: This is much more than a simple teaser announcing the debut full length album by Seneptika. This EP is a truly successful creation appealing to the fine tasters of IDM.