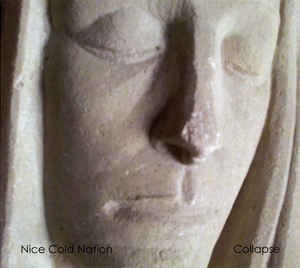 Background/Info: Nice Cold Nation is a French band from the Northern part (Rouen). There’s no much information available about the band, but they last year released a debut album “Sunless”.

Content: The title of their debut work clearly sounds as an indication to understand their music. This band clearly deals with dark music, which finds its inspiration in the realms of the 80s and early 90s cold-wave movement. Comparisons are sometimes easy to make and hard to understand as it remains pretty subjective, but there’s a Trisomie 21 flavor hanging over their work. The song “Revival (Ian Curtis)” seems to indicate a wink to the Joy Division front man although it doesn’t sound like Joy Division at all. The lyrics deal with a real desperate state of mind and you can feel the breath of death in your neck.

The first part of “Collapse” is hesitant and without passion. That’s especially true for the vocals, which are simply under produced. Quite progressively the album moves towards more convincing passages even resulting in a few beautiful sounds. The work remains dark, but dreamy and even the vocals have been a bit improved now.

+ + + : From this album I’ll keep in mind a few beautiful songs mixing sorrow and reverie while revealing the right balance between guitar and synth parts.

– – – : Globally speaking this work is missing passion while a talented producer could improve most of the aspects.

Conclusion: “Collapse” moves from song to song without real inspiration, however a few cuts will get skeletons to dance. It all means that there are a few good ideas running through this composition, but it has to be improved.