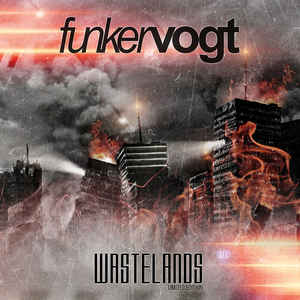 Background/Info: “Wastelands” is the second Funker Vogt album with Chris L on vocals while Gerrit Thomas remains the sonic Captain and René Dornbush to complete the line-up. Next to a regular version, Funker Vogt also released a limited version in digipak format plus featuring 4 bonus cuts.

Content: The last year released “Code Of Conduct” was an honest production, but definitely not the best I’ve heard from Funker Vogt. “Wastelands” gets back to the initial power of the band –which they never totally lost, but it’s a long time ago they sounded that aggressive.

This is a hard album driven by the typical danceable kicks, fast sequences, EBM-driven bass lines and the magic touch and arrangements of Gerrit Thomas on top. The songs are sung in German and English language, but Chris L seems to be more comfortable singing in English.

The 4 extra songs are revealing a similar power.

+ + + : This work really features all ingredients to speak about a terrific album. There’s a constant power running through “Wastelands”. There’s no real break, but a succession of powerful and danceable songs. I noticed some great EBM-inspired bass lines and the traditional punchy electronics and mind-blowing kicks. This work could have been entitled “We take no prisoners”! The songs reflect the great experience and maturity of the members. I also have to say a word about a few titles such as “Ikarus” and “Thor’s Hammer”, which are great metaphors for their lyrical content.

– – – : This is without a shadow of a doubt one of Funker Vogt’s best albums from the past 10-15 years. The songs are maybe a bit similar, but it remains pure Funker Vogt so there’s no reason to complain!

Conclusion: Merciless and powerful, “Wastelands” clearly confirms that Funker Vogt is still alive and more kicking than ever before!

Vegas v Macau: which is the best gambling and clubbing destination?