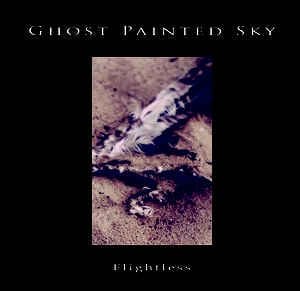 Background/Info: Originally set up as a solo-project by David Strong and joined after a few years by vocalist Lisa Wood, Ghost Painted Sky has released a few number of EP’s and are now unleashing their debut full length album.

Content: The work takes off with bombastic gothic music joined by some ritual elements on top. The bombast is one of the album’s characteristics, but quite progressively the duo also reveals moodier- and even melancholic cuts. The work also features a cover version of New Order’s “Doubts Even Here”, which brings us back to the 80s.

+ + + : I especially like the bombast running through the opening songs and especially “Liminal”, which is joined by a kind of ritual voices. The band is clearly inspired by 80s cold-wave, which mainly comes through in the mewing guitar play. The song “Sick” is a quite cool track illustrating this retro-approach. Lisa Wood injects a cool emotional input in a few tracks.

– – – : I’m mainly missing clear transitions from the verses into the choruses. That’s probably one of the reasons there’s no truly climax in the songs.

Conclusion: This work is an easy listening moment, but without real highlights. I’m sure Ghost Painted Sky can do much better!

Best songs: “In The Grey Light Of Dawn”, “Your Scars On Mine”.