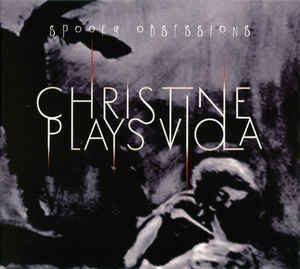 Background/Info: Christine Plays Viola is an Italian 5-head formation active since 2008. They joined hands with Manic Depression Records to unleash their third album.

Content: “Spooky Obsessions” takes of a solid and passionate way revealing a heavy guitar and a rather classical rock-goth sound approach. The sound is clearly inspired by the golden sound formula of 80s formations in the genre. The low bass playing and typical mewing guitar riffs joined by some synth arrangements on top are clearly indicating the influences of the band.

However I can’t say this band is a kind of copiers. You easily can hear where they got their influences from, but I can’t compare them to any other formation. Next to the more solid pieces this production also reveals a few softer and even dreamy new-wave cuts.

+ + + : “Spooky Obsessions” is a well-crafted and therefore successful album revealing several cool songs. From the harder and dynamic opening pieces to the somewhat dreamy songs the band clearly feels comfortable dealing with both aspects of their sound. I also like the synth arrangements coming through at the surface of “Poles Apart”. The main strength of this formation however remains the great and classical new-wave guitar playing.

– – – : There are several noticeable songs on this work, but unfortunately not an absolute hit song. That’s precisely what this album is missing to get a wider exposure.

Conclusion: “Spooky Obsessions” is an interesting production for adapting good-old new-wave standards into a very own and contemporary format.