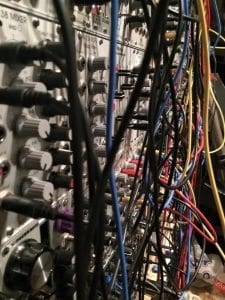 Alexander Jarlev and Tomas Kulberg is an experienced Norwegian electronic duo. They already worked together in bands like Anstalt and Pogrom Synod. Atropine is another formation they set up during the late 90s and which got reactivated after a hiatus of several years. They recently released their newest opus “Assailant” on EK Product revealing an elaborated and sophisticated dark-electro sound, which still is one of the best albums in the genre of 2016.

Q: When did you get contaminated by the ‘electro-underground’ virus and what incited you to set up Atropine?

Atropine: In the late 80s discovering the Mute/PIAS/Zoth Ommog/Nettwerk/Volition labels (and countless others). After that there was no turning back. We’ve been a team since 1992, first as part of Anstalt, then from 1994/95 as Atropine.

Q: We clearly can speak about 2 periods in the band’s history: a first one around the late 90s till 2001 and second one, which saw you releasing the album “Recurring Nightmares” in 2014. How would you analyze both periods and do you see main changes/evolutions?

Atropine: During the first period from around 1996 to 2001 we recorded the tracks that became the “Master Raze”-album. Soon thereafter we went on an extended hiatus and didn’t really get back to recording as Atropine again until 2008. Most of the “Master Raze”-material was re-recorded from scratch to form “Recurring Nightmares”. A few years later EK Product approached us to release on their label. We thought the original album sounded very dated so we decided the best option was to just do it over with vastly improved gear. It was much more of a chore for us to record music early on when everything revolved around MIDI and a large degree of detailed programming was always required.

Things are a lot easier now and we have all, but abandoned the need for traditional sequencing after building a large modular synthesizer system.

Q: Late 2016, you released the album “Assailant”, which I consider as your most elaborated and best work to date. Tell us a bit more about the writing and sound of this album?

Atropine: “Assailant” is basically the result of around 20-25 studio sessions. Almost everything you hear was generated spontaneously within an eight hour time frame and subsequently edited as pure audio until we felt we could approve of it. There’s a strong element of improvisation permeating the whole album so bass-line tweaks, strings and percussion tracks were recorded live. Lyrics were typically written on the spot and the vocals recorded with minimal preparation. We do not go back and re-record stuff or do any sort of overdubbing.

Rather we accept the errors that creep in using this approach and use them as a challenge to improve our process and extend our range. Over the two year span after “Recurring Nightmares”, that has worked out rather well. We enjoy working under the added pressure. Things that are easy to do, usually merits nothing. But, most importantly we enjoy our recording sessions immensely. Copious amounts of beer and electronics – it can’t be beaten!

Q: “Assailant” reveals sophisticated sound treatments and a mix between haunting electro atmospheres and electro-industrial treatments, which remind me to bands like Skinny Puppy, Mortal Constraint ao. Do you feel related with the sound of other bands and what does it say about your sources of inspiration?

Atropine: We are not denying the fact that bands like Skinny Puppy are integral to what we do. But so are more than a thousand other artists. Around half-way through our sessions we stop screwing around and start building up for vocals and final assembly of the constituent parts of the track we’re working on. Our modular system is quite simply the most extreme tool an electronic musician can have. Anything else in the studio can be routed through it at any time. The options are quite frankly unlimited. You can have a complete track ready for mastering and less than ten tweaks on select controllers and you have a completely different track.

This would have taken several sessions to accomplish in the 90s but now can be done in under a minute. Our inspiration is drawn from so much music that it’s impossible to even begin listing it here. However, if you are truly interested in the vast number of artists that filter through Atropine you can begin by looking at this complete list of my listening habits since 2006:

Q: Next to the “Assailant”-album released on EK Product I noticed you also self-released the “Assailant::Remixed”-album on digital format. What have been your criteria to choose for these bands and do you have favorite remixes?

Atropine: Most of the artists on “Assailant::Remixed” are friends of ours going back years, while others are just really nice people we encountered along the way. We wanted a non-traditional remix album. Usually it’s a lot of beats and all remixes are of a couple of tracks from an album with more than ten individual tracks and quite often the remixers operate within roughly the same musical genre.

To counteract this, we gave our remixers complete access to everything we had recorded. It’s a lot of extra work, but it’s all about the end result. I (Cthulberg) have a couple of favorites, but I feel it unfair to name them because of the extreme variety in the remixes. For instance Kant Kino must have spent a considerable amount of time turning “Sewercide” into a pop-song, while Europ Europ latched on to the string on “See Through” and made a lo-fi funeral dirge. It’s impossible to rate these things, but we cherish every single contribution we received, but our reasons for that varied with the spirit in which it was recorded.

Q: What did you try to express in the clip of “Exterminism” and what’s the importance of a clip and a site like Youtube today?

Atropine: This is an impossible question for us to answer as we are for the most part a non-entity on social media sites. The concept in the video has only an extremely tenuous link to the concept behind the track itself and is based on an idea developed by director Christian Ryder which he had mulled over for a long time going back to his school days. We had little or nothing to do with its production and feature only very briefly at the start of the video. Our take on “Exterminism” is outlined in the cover artwork where it replaces the lyrics this time. Mainly this is because most of “Assailant” consists of songs that deal with humanity at its lowest, basest form and so reading that text will sum it up pretty well. The whole thing is too convoluted to try and explain here I think.