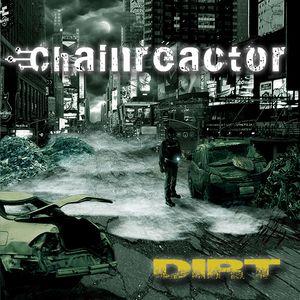 Content: Chainreactor has dropped its 5th full length and it will once again have a huge impact on the dancefloors. The last year released “Mass Driver” earned a place on my personal list of 10 best albums of 2014 and I would not be surprised to see this new work getting a place as well for 2015.

The sound formula of mastermind Jens Minor remains quite identical to his previous releases. He mixes hard, pumping techno kicks with heavy electro-industrial sound manipulations, dark atmospheres and some vocals. The addition of vocals is an aspect that happened during the past years seeing Kay Schäfer joining in.

I’ve often considered Chainreactor to be a disciple of Noisuf-X. there are for sure some differences in the global treatments while Noisuf-X remains the absolute master in the genre. But it is really exciting to see a band like Chainreactor that has transposed these influences into a personal sound approach. Jens Minor likes to manipulate sounds to create a kind of raw-rave style, which stands for the industrial side of techno music. The addition of vocals on several songs is not exactly something common in the genre, but it makes the particularity of this band.

The vocals and music together are in perfect balance. It also brings the sound a bit closer again to usual dark-electro standards by adding this spooky element. I think it was a great idea to see Kay Schäfer becoming member of the band.

“Dirt” again stands for a succession of great and irresistible dance tracks. The opening part is simply phenomenal and I want to tip songs like “Over The Line” and “Torpedo”. The songs were composed with great harsh sounds injecting this cold, industrial touch to the work.

The last part is even more impressive. Chainreactor sounds like it is losing control joining a transcendental state resulting in different potential hits like “Dirt”, “Sicko Cell” and “The Danger”. The pumping kick and icy, scratching sound treatments can’t leave you unmoved. This music is true provocation to dance and expose your body to the rhythm of a frenetic cadence.

Notice by the way that the album has been mastered by Noisuf-X.

Since you’re here … … we have a small favour to ask. More people are reading Side-Line Magazine than ever but advertising revenues across the media are falling fast. And unlike many news organisations, we haven’t put up a paywall – we want to keep our journalism as open as we can. So you can see why we need to ask for your help. Side-Line’s independent journalism takes a lot of time, money and hard work to produce. But we do it because we want to push the artists we like and who are equally fighting to survive. If everyone who reads our reporting, who likes it, helps fund it, our future would be much more secure. For as little as 5 US$, you can support Side-Line Magazine – and it only takes a minute. Thank you. The donations are safely powered by Paypal.
Tags: Chainreactor