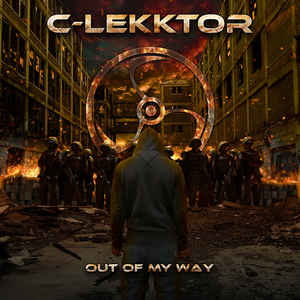 Background/Info: Marco Barientos is a busy artist. After releases with his side-projects (Circuido Cerrato and Kromak) he now strikes back with a new opus of his master project C-Lekktor. It’s the first album since “Final Alternativo” (2014) and the first album released on Digital World Audio. The ‘limited’ edition has been released as a so-called digi-book and features an extra disc of 4 tracks.

Content: “Out Of My Way” is an album that first of all moves on there where previous C-Lekktor work stopped. It remains a powerful and dark/hard-electro inspired work joined by the harsh screaming vocals of Marco Barientos. But the album also moves into other ‘dark’ directions, carried by EBM bass lines reminding me of a more dark-electro/techno style, which is more comparable to Noisuf-X. The work also reveals a few more evasive cuts.

The bonus disc brings us back to the ‘classical’ C-Lekktor format, which stands for sonic violence and pure dark club music.

+ + + : C-Lekktor confirms their leading status of Mexican dark-electro bands, but the band already reached a word-wide recognition in their music genre. This is the kind of work that will appeal for fans of Suicide Commando and Hocico (for the ‘classical’ pieces), but still for more electro-industrial & rave freaks à la Noisuf-X. “Out Of My Way” appears to be the most versatile album of the band, but that’s an evolution I like as it opens new horizons. The music is not only powerful, but accomplished with great sound treatments, icy sequences and pumping bass drums. The harsh and distorted vocals totally match with this haunting atmosphere and sonic violence. I also enjoyed the more evasive cut (cf. “Mundo Adverso”) featuring delicious female backing vocals. It’s a mature and professional production.

– – – : The versatile aspect of the work maybe makes this album a little less unique. I expected more (h)el(l)ectronics, but C-Lekktor took my by surprise by experimenting more technoid and industrial-rave paths.

Conclusion: This is without a shadow of a doubt an album numerous dark-electro lovers were waiting for and I think they’ll not be disappointed discovering the violence of the sound and the efficiency of the songs!

Since you’re here … … we have a small favour to ask. More people are reading Side-Line Magazine than ever but advertising revenues across the media are falling fast. And unlike many news organisations, we haven’t put up a paywall – we want to keep our journalism as open as we can. So you can see why we need to ask for your help. Side-Line’s independent journalism takes a lot of time, money and hard work to produce. But we do it because we want to push the artists we like and who are equally fighting to survive. If everyone who reads our reporting, who likes it, helps fund it, our future would be much more secure. For as little as 5 US$, you can support Side-Line Magazine – and it only takes a minute. Thank you. The donations are safely powered by Paypal.
Tags: C-Lekktor, EBM, Hocico, Noisuf-X, Technoid