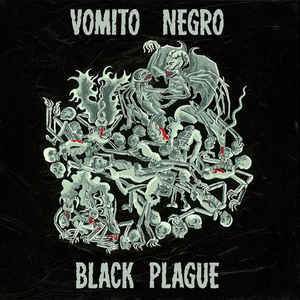 Background/Info: Vomito Negro is back on track. Still driven by original founder Gin Devo and assisted (mainly live on drums) by Sven Kadanza. “Black Plague” is the tenth (new) studio album in history of this Belgian pioneer of dark-electronics and EBM.

Content: The sound of Vomito Negro remains something special and timeless, but different from most of the contemporary artists in the genre. The reason is quite simple and consists of Gin Devo’s way of composing music. I think it’s more about a kind of ‘sound philosophy’ of an artist who still prefers to use his old, analog gear with this very special sound instead of cheap and trendy software synths and programs. But Vomito Negro also remains driven by this eternal darkness supporting the entire album with haunting and tormenting atmospheres. The spooky vocals are a perfect accomplishment to this obscure opus.

+ + + : You already have understood I’m fascinated by the sound manipulations and tormenting atmospheres this album is made of. It’s pure ‘old-styled’ Vomito Negro, which moves back to the early years of the band. Everything sounds so dark and desperate, like an artist who’s maybe chasing his demons by an exorcism called ‘music’. The work reveals oppressive atmospheres, aggressive EBM bass lines and evil vocals sung by Gin Devo.

– – – : The album only features 9 songs, which is maybe a pity, but here again Gin Devo is ‘old-styled’. No reason to put extra songs without interest, but I have to admit it would have been cool to get a few extra cuts. Globally speaking I like this work expect a few more experimental tracks such as the instrumental “Pagan Epitaphs”.

Conclusion: In times where dark-electronic formations are sounding pretty similar or are just an emulation of a bigger name, Vomito Negro sounds as a real relief. This band hasn’t lost its initial magic and oppressive darkness.