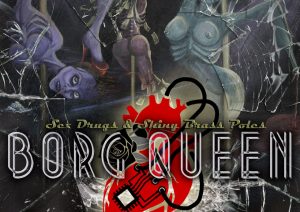 Background/Info: Borg Queen is Vancouver (Canada) female artist Jenny Kirby. She introduced Borg Queen as ‘an alcoholic stripper turns musician when she decides to get sober and write a concept album about her experiences in the exotic entertainment industry’. Borg Queen plays all of the instruments herself, did the production, engineering… to keep it short, an artist into the real DIY spirit!

Content: Jenny Kirby looks a bit like an hybrid between Marilyn Manson and Emilie Autumn, both evoked as some sources of inspiration. I can’t say that the music really sounds as a fusion between both bands, but you’ll quickly notice the gothic inspiration.

Somewhat cabaret-like (and that’s maybe a link with Emilie Autumn) and sometimes mixing elements of rock and pop, the album is  characterized by some explicit lyrics.

+ + + : Borg Queen clearly has conceived her gothic universe, which could find no better inspiration than the personal experiences of Jenny Kirby. Music became a cure to chase her demons resulting in a minimal gothic composition and a strong imagery! I like some of tracks for the mix of darkness, provocation and a kind of perverted sensuality. The explicit lyrics only accentuate the global feeling. I also remain a adherent of the DIY attitude!

– – – : The main element that hurts is the lack of production. Borg Queen has the image, but now has to improve the global production. The songs are a bit too similar and often missing a real climax. The image is nothing new, but this kind of provocative, sexy goth attitude can always find an audience!

Conclusion: I can’t say to have been fully convinced by the work of Borg Queen although I want to remain optimistic for future work. This artist maybe has to consider working with a producer to improve the sound.