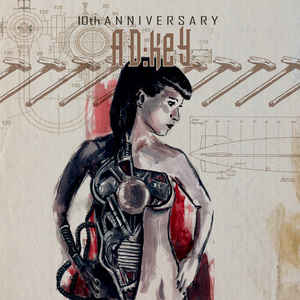 + + + : AD:KeY definitely belongs to the best contemporary EBM bands and this anniversary-album simply confirms it. From their very first album on which, they masterly accomplished alluring EBM carried by danceable kicks, elaborated structures characterized by solid bass lines, metallic percussion and cool strings. The vocals always felt like a kind of sonic intercourse between the sterile vocals of Andrea and the more testosterone vocals of Rene. This is powerful EBM, which also reveals a new cool song entitled “Pfeil In Den Hertz”. The cover version of “Kampfbereit” also remains a great piece of music. It sounds as this song was originally written by AD:KeY. They masterly transposed the 242-version into their own sound approach. I also want to say a word about the artwork and especially the funny pictures inside the booklet.

– – – : The sound formula is quite repetitive and after 10 years of involvement it no longer has any secrets. But in the end what we all want is to hear and enjoy good music!

Conclusion: This album is a well-deserved anniversary gift for this great contemporary EBM band.