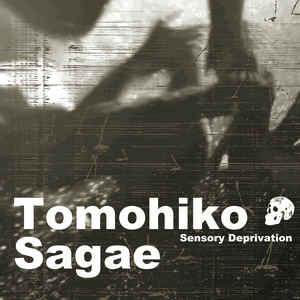 Background/Info: Japanese producer Tomohiko Sagae is one of the newest artists who have joined the Hands roster. This artist has already released an impressive number of EP’s, but this album is his official debut full length featuring 12 cuts of pure power and terror.

Content: When I think about Japanese artists active in the underground scene I instantly think about the so-called Japanese ‘noise-school’. Tomohiko Sagae definitely is inspired by noise, but he mixes it with industrial and techno elements.

Hard-banging industrial rhythms have been joined by an impressive noise palette, which will rapidly lead the listeners into a transcendental trip. Buzzing sound waves are meeting frenetic cadences while I even notice some epic arrangements.

+ + + : I’m not saying that Tomohiko Sagae has reinvented industrial music or that he created a new techno format. He simply mixed different influences together resulting in a judicious and heavy, shamanic dance style. “Sensory Deprivation” stands for constant power! It’s a merciless release with multiple apotheoses. The main strength however is the production of the percussion layers. I more than once got the impression that the drums were real and performed by multiple percussionists. It reminds me a bit of obscure, but great 80s industrial artists. The true spirit of industrial music is definitely present on this work!

– – – : There’s no real break on this album; it’s a constant demonstration of power and sonic violence so you really have to love this kind of music to endure the listening.

Conclusion: Tomohiko Sagae is a sonic bulldozer who clearly annihilates everything on his way, but that’s precisely the feeling industrial freaks gone like! This is a great new comer on Hands!