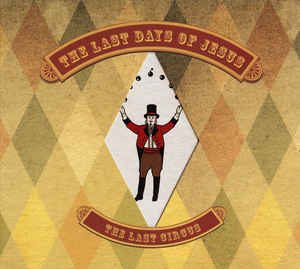 Background/Info: Hailing from Bratislava (Slovakia) the Last Days Of Jesus was set up in 1993 and progressively gained some recognition and status in their homeland. They released several productions and one of their early albums (cf. “Arma Christi”) was even released on Alice In… (1997). “The Last Circus” is their newest opus, which took them 8 years to achieve. Several guest artists contributed to the work.

Content: “The Last Circus” takes off into a circus style with a great announcement, which is rapidly joined by powerful goth-rock music. This is for sure the main influence of the band, but I also noticed post-punk influences. A few cuts are quite B52’s like. The vocals are passionate and sometimes a bit theatrical like adding some fervor to the production.

+ + + : I honestly didn’t really remember to have ever heard of The Last Days Of Jesus, but I have to admit this is a well-crafted work. I also like the mix of rock, punk and gothic music, but I definitely prefer the cuts reminding me of the B52’s from the “Planet Claire”-period. The songs are carried by solid guitar riffs and sometimes arranged by piano arrangements and revealing accordion and trumpet playing on other songs. I like this diversity and non-conventional approach resulting in an old-styled work mixed with very own and sometimes funny ideas.

– – – : There are several cool and noticeable songs, but maybe not an absolute hit. That’s precisely what this work is missing.

Conclusion: If you want to discover a band which is clearly into fun and dealing with great goth-rock & punk music you definitely have to visit the music circus created by The Last Days Of Jesus. Punk is alive in Slovakia!

Tags: The Last Days Of Jesus