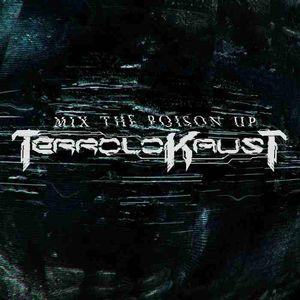 Content: Terrolokaust is a band I kept an eye on since their very first album (cf. “Gas”) released in their homeland by Mutant-E Records. They afterwards joined DWA releasing a few more albums and EP’s.

The digital edit of “Mix The Poison Up” and the CD-re-release of the album “Spit The Poison Out” (featuring the bonus CD “Mix The Poison Up”) got simultaneously released featuring 8 new remixes by iVardensphere, Phosgore, C-Lekktor, Retrogramme, Seraphim System, ESA, Ruinizer and Chainreactor.

The CD edit of “Mix The Poison Up” features 12 remixes while the digital version features a total amount of 15 remixes. It’s all a bit confusing when you realize that Vendetta Music released “Spit The Poison Out” for the American scene in 2013 with 3 remixes, but accomplished by other bands. The 3 extra remixes on the new digital edition originally appeared at the CD format of “Mix The Poison Up” released by Deathwatch Asia in 2013.

Terrolokaust got remixed by interesting names unleashing a quite diversified result. Rotersand remains a ‘Master’ when it comes to accomplish a remix and it’s one of the most noticeable bands. The remix of “Reversing In Circles” is a noticeable song.

My favorite remixes are those of Chainreactor, FGFC820, Phosgore, C-Lekktor, Modulate and ESA. “Pointless” was remixed by Chainreactor in a rather expected electro-industrial-rave featuring the harsh vocals of Javi Sasgittar on top. A somewhat similar remix is the one of “Two-Faced Leader” transposed by Phosgore into another great industrial-rave piece, which sounds hard and merciless.

FGFC820 remixed “The Way It Must Be” in a dark-EBM style, which is really boosting and reminding me a bit of early Inertia. C-Lekktor is once more convincing me that this project is slowly becoming one of the best dark-electro bands of the past few years. The remix of “Reversing In Circles” got a hard adrenaline injection, which is a real dancefloor killer.

Modulate did a great job as well remixing “The Way It Must Be” (a remix that was originally released as B-side of a 7″ vinyl single taken from the album) and I here especially want to mention the cool dark sequences running through the song.

Last, but not least there’s a more rough and industrial-orientated remix of “Addicted” by ESA.

Other remixes from bands like iVardensphere, Nitro/Noise, Sirus, Retrogramme, Ruinizer and Blackopz are not bad at all, but they can’t really compete with the aforementioned remixes.

Conclusion: This digital edition of “Mix The Poison Up” is interesting for all the fans of the band. There’s a great diversity in influences and an impressive selection of talented and established dark-electro acts.