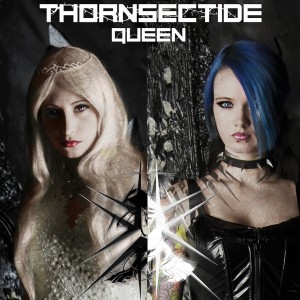 The Russian dark electro act Thornsectide, which formed in the beginning of 2015, have landed a first download single, “Queen” which is available now via Bandcamp.

Officially out since September 29., the download single includes the original song and a few remixes from Russian colleagues Freaky Mind and [ Sin.Thetic Squad ] but also from Mexican project Aim&Execute, which present their own versions of the title track.

Released digitally by Insane Records via Bandcamp it acts as a teaser for the band’s upcoming full-length album.

Also available is the recently released official lyric video of “Bathory”, a track telling a story of a bloody countess of the past. You can watch that rather funny video below.

Since you’re here … … we have a small favour to ask. More people are reading Side-Line Magazine than ever but advertising revenues across the media are falling fast. And unlike many news organisations, we haven’t put up a paywall – we want to keep our journalism as open as we can. So you can see why we need to ask for your help. Side-Line’s independent journalism takes a lot of time, money and hard work to produce. But we do it because we want to push the artists we like and who are equally fighting to survive. If everyone who reads our reporting, who likes it, helps fund it, our future would be much more secure. For as little as 5 US$, you can support Side-Line Magazine – and it only takes a minute. Thank you. The donations are safely powered by Paypal.
Tags: Insane Records, Thornsectide