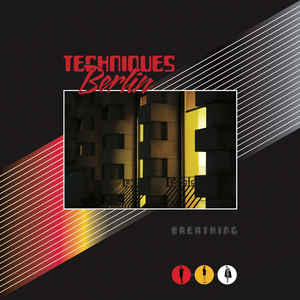 Background/Info: Some of you for sure know Andreas Gregor and Dave Rout from their involvement with bands such as !Bang Elektronika, Digital Poodle, Datafreq ao. They also set up Techniques Berlin in the 80s, which has now been reactivated. “Breathing” features new songs, previously unreleased material and remixes while the digital version has a nice little bonus of 5 extra tracks.

Content: “Breathing” sounds like disembarking from a time-machine that has brought us back to the 80s. The music is pure analogue-like and often remind me to Fad Gadget. This is good-old synth-music, which sounds cold and melodic. Some songs are featuring female backings.

The second disc is mainly featuring remixes and a few cover versions. This is an opportunity to discover remixes by bands such as  23RD Underpass, Classioline, Depression Era, Electronic Dream Factory, Images In Vogue, Kevin Komoda, Makina Girgir, Nine Circles, The Glen And Joe Show, Tony Marinello, Ultra Arcanum and !Bang Elektronika. You also get 3 cover versions from Rational Youth, Epic Dreams and Agents In Infrared (another project by Andreas Gregor).

+ + + : If you’re freak of retro-electronics this analogue electro/wave-pop album is a must have. It’s totally 80s like and brings the magic of vintage gear alive. This band doesn’t innovate, but simply belongs to the 80s and recreate the music from that great decade. The sound is icy and sterile, but still melodic and danceable. There are numerous noticeable cuts and still interesting remixes by Classioline, !Bang Elektronika and especially Tony Marinello. I also have to mention cool cover versions from songs by Rational Youth and Epic Dreams.

– – – : I definitely prefer the original versions instead of the remixes so this extra disc could maybe have been reduced to a few songs.

Conclusion: Techniques Berlin is a forgotten and even rather unknown band from the 80s Canadian scene, which has been now reactivated and still sounding fully 80s like. This is a great piece of music.