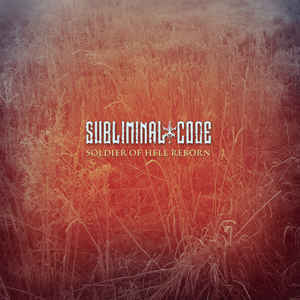 Background/Info: Subliminal Code is a project from Venezuela set up and driven by Raul Jose Padron. After the album (cf. “Karma In Mortem”) released in 2014 on Advoxya Records, this ‘new’ opus is a kind of back to the roots. The work features reworked songs from the debut release “Soldier Of Hell” originally released in 2011 on Engraved Ritual and reveals a mix of furious guitar and electronics. Four songs from this album have been reworked and re-recorded while you also will discover 10 remixes from the new versions.

Content: No doubt about it, Subliminal Code is the hardest band I’ve heard on Advoxya Records. The reworked songs are pure hardcore. The music and cadence both stands for an infernal production joined by furious and enraged vocals. It’s impossible to understand the lyrical content, but you’ll notice the songs have been sung in Spanish and English. “Soldier Of Hell” sounds speed-like and without any break.

Most of the remixes hold onto the devilish tempo, but most of the bands tried to inject more ‘classical’ dark-electro elements in the atmospheric part and melody lines. Remixes were accomplished by Homicidal Feeling, Viscera Drip, Benjamin’s Plague, Cold Therapy, Devilsight, Mulphia, Reactor7X, Stahlnebel & Black Selket, Proyecto Crisis and Adeonesis. Fans of Advoxya Records will immediately notice the remixes were made by label mates.

+ + + : I think it’s a good idea to rework early and somewhat forgotten tracks to bring them back to life. This album also injects some diversity to the dark-electro roster of the label.

There are several noticeable remixes and I especially want to recommend the work of Devilsight transforming the original cadence in a rather dark-electro hopping rhythm. Proyecto Crisis did a great job as well and will mainly ravish the dearest dark-electro lovers. I also want to mention Benjamin’s Plague, Reactor7X and Stahlnebel & Black Selket.

– – – : The hardcore and enraged format of the reworked songs by Subliminal Code isn’t an easy thing to endure if you expect dark-electronic music. It’s not exactly the most accessible release of the label and maybe more suited for metal fans and hardcore heads.

Conclusion: “Soldier Of Hell Reborn” stands for violence and the mutation of electronics into merciless, hardcore music.