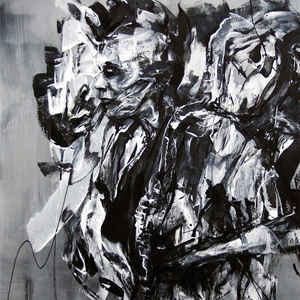 Background/Info: You take Jasse Tuukki and Toni Myöhänen of STROM.ec and Kristoffer Oustad of Plague Machinery, Kristoffer Nyströms Orkester… and you get Stromstad. They started on this new project in 2015 and released “New Devoted Human” late 2017.

Content: The album is dominated by impressive heavy sound blasts. You also will notice harsh and possessed half spoken vocals, which are more a kind exultation. But other passages are quieter and at the same time tormented. It creates an impression of nihilism, which next moves again into heavy crashes and heavy noises. The album ends in a pure dark-ambient outro.

+ + + : The sound production is absolutely impressive. It’s an overwhelming sensation of monstrous sound blasts mixed with countless electronic effects and noise manipulations. The work is quite diversified and moves from death-industrial passages into dark-ambient. The common elements between all ingredients are terror and torment. It’s the kind of music that won’t leave you unmoved and features dark lyrical themes like an apology of the evil side of life…

– – – : “New Devoted Human” is an extreme experience in sound, which sometimes is a bit predictable. Even if the album covers different influences, none of the styles will take you by surprise.

Conclusion: Stromstad reminds me –maybe of the band name evoking a city (=stad) to the dystopian universe of Orwell. Terror rules and whatever you want to do you can’t find any exit, but that’s precisely a delicious vision for all lovers of this music genre.