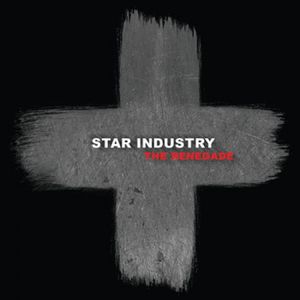 Content: It took 7 years for Star Industry to unleash their new work. They for sure are the Belgian pride of gothic music, but maybe not considered as a leading band in the genre. I don’t know if “The Renegade” will increase their popularity, but I can already reveal this album sounds like a ‘smash hit’ and will be for sure one of the hottest goth releases of the year.

The opening song “Eilyne” has been previously released as EP-title song and is an amazing song. This track is the perfect mix between new-wave, goth-rock and electronics. Guitars and electronics have been merged into a sublime symbiotic composition. Star Industry’s singer remains the contemporary incarnation of Andrew Eldritch. He sings in a great passionate way while “Eilyne” also features sexy female spoken words.

There was no better song to start off with, but I was wondering what the rest of the album would deliver. “The Renegade” is an amazing piece of work revealing the goth-rock sound Star Industry is used to composing, but accomplishing it with an extra electronic touch. I think we no longer can speak about one of the numerous ‘Sisters’ clones, but about a band that has mixed a solid new-wave basis together with a unique touch. This way Star Industry becomes one of the most refreshing and creative gothic formations while “The Renegade” has the potential to become a reference in the genre. The global production work left me breathless. Their sound is a powerful expression, which makes you feel like a dwarf lost in a cathedral.

Star Industry always has been a talented formation to compose great choruses, and here again they simply excel in carrying and somewhat pop inspired passages. There’s a constant mix between gothic- and rock music while the choruses have been accomplished with a pop approach. “Reign On Fire” is a sublime cut in the genre and another potential hit. I also have to mention the title song, which is empowered by a delicious epic element emerging from female chants.

Every single song is a phenomenal experience and it really is a long time ago that a gothic release had that much impact on me. The somewhat quieter “Selling Icons” is a kind of break, but written with cool piano arrangements. “Revelation” and “Dark Rain” both are more representative for the polished work. But in the end I would say that there’s something to say about each of the songs making from “The Renegade” an absolute must have.

I also highly recommend the limited edition of this work featuring 10 more songs. We here get some unavoidable, but great remixes next to outstanding cover versions, 2 unreleased demos from 1996 and a live song recorded in China.

Both unreleased demos from 1996 bring us back to the early years of the band. They already revealed another demo song on the “Eilyne”-EP. It clearly sounds more inspired by The Sisters Of Mercy, but you can already hear the band’s fine taste to compose captivating music. A last noticeable cut is the “Paris Remix” of “Eilyne”, which is quite clubby and revealing some technoid arrangements.

Conclusion: I think there’re numerous adjectives to qualify this album so if I’d to choose one it would be: brilliant!