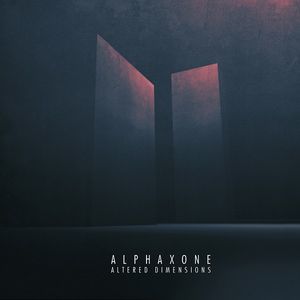 Content: Iranian artist Mehdi Saleh has released an impressive number of productions in a rather short lapse of time. The 1st production saw the light of day in 2010 and “Altered Dimensions” is the 6th official full length of work.

This new work confirms the great ambient writing skills of Saleh, but I especially was impressed by the global production work. This album features impressive sound layers revealing an overwhelming power. The sonic creation by Alphaxone sounds complex and fascinating. The tracks constantly move in between 2 poles; pure reverie on one side and chilling passages on the other. Globally speaking the work remains –of course, characterized by its obscure inspiration. There’s a nice twist between experimental elements like field recordings/samplings and overpowering electronics. But the compositions also reveal great sound manipulations brining diversity to the album.

The opening cut “Distances” especially shows the subtle sound arrangements while merging dark atmospheres together with aquatic noises. The dreamy, but darker side of the album emerges on, “Human Frequencies” while we next dive into an abyssinian space (cf. “Passing Through”).

The next few cuts are pure ambient jewels! “Midnight Waves” and “Aftermath” both take you away into an obscure dream featuring resonating sound frequencies and monstrous sound manipulations. The tracks are refined by freaky noises which were mixed in the background.

Among the last cuts left “Equilibrium” is one more noticeable track revealing an elaborated writing and fascinating treatments. The least I can say is that Alphaxone doesn’t really sound like a ‘classical’ dark-ambient project. The work is more into complexity and details while carried by an impressive production work.

Conclusion: I haven’t heard all of the productions by Alphaxone, but from what I’ve heard I can assure you this new work for sure is the most accomplished album today. This is an intelligent and judicious approach of composing dark-ambient music.