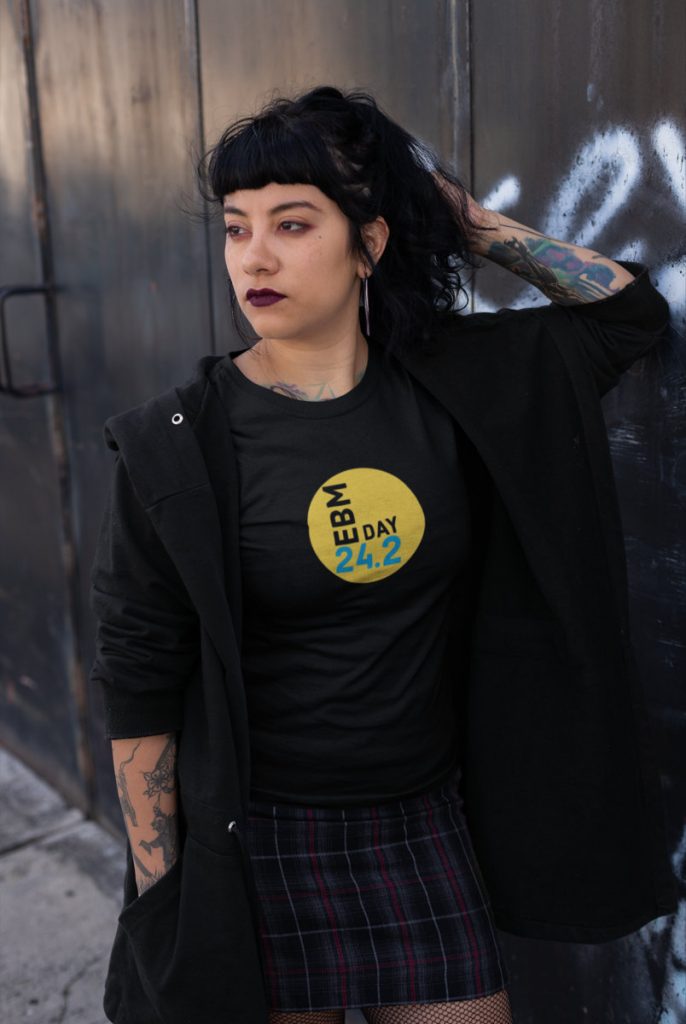 It was Front 242 who also gave the name to International EBM Day which is celebrated on February 24th. The logic is very simple: ever since Front 242 started up in 1981 the number 242 has held a special position in the numerology of Electronic Body Music. Using the date format often used in Europe (dd/mm = 24/2) it’s fairly obvious why the International EBM Day is celebrated on February 24th.

Since 2022, this special yearly day has an extra meaning and that is the fight from the Ukranian people against the Russian war machine that invaded their country on February 24th 2022.

At Side-Line we refuse to let Putin and his companions hijack what used to be a joyful EBM day, so we decided to both honor Ukraine’s resistance and EBM-day in one by launching a special EBM Day T-shirt line. All revenue from this T-shirt line will go to Ukrainian aid.

What is EBM exactly?

EBM, or Electronic Body Music, is a subgenre of electronic music that originated in the early 1980s in Belgium. It is characterized by its heavy use of synthesizers and drum machines, as well as its fast, repetitive beat and dystopian themes.

EBM has its roots in the post-punk and new wave movements of the late 1970s and early 1980s, and was influenced by genres such as industrial and techno. The genre was created by a group of Belgian musicians who were inspired by these movements and wanted to create a sound that was darker and more aggressive.

One of the key characteristics of EBM is its use of electronic instrumentation. Synthesizers, drum machines, and other electronic equipment are heavily used to create the fast, repetitive beats and electronic sounds that are characteristic of the genre. The lyrics of EBM songs often address themes of control, power, and oppression, and are often sung in a robotic or monotone style.

EBM has had a significant influence on other electronic music genres, including techno, industrial, and darkwave. Many artists and bands in these genres have been influenced by EBM, and the genre has a dedicated following of fans around the world.

EBM has a long and storied history, with many influential bands and artists contributing to its development over the years. Some of the most well-known EBM bands include Kraftwerk, Front 242, Nitzer Ebb, and Depeche Mode. These bands have helped to shape the genre and create the distinctive sound that it is known for today.

In addition to its influence on other electronic music genres, EBM has also had an impact on popular culture and fashion. The genre has a distinctive visual aesthetic, with many fans sporting black clothing and leather or PVC gear. The music and style of EBM has also been featured in movies, television shows, and video games.

Despite its origins in the 1980s, EBM remains popular today, with many contemporary artists and bands continuing to produce music in this style. The genre has evolved over the years, with new artists bringing their own unique perspectives and influences to the table. However, the core elements of EBM – heavy use of electronic instrumentation, fast beats, and dystopian themes – remain unchanged, and continue to be an important part of the genre.

Overall, EBM is a unique and influential subgenre of electronic music that has had a lasting impact on popular culture and the music industry. Its distinctive sound and style have made it a beloved genre for many fans around the world.

Today, EBM is still a popular and influential genre within the electronic music scene, and it continues to attract new fans and artists.

There are many current EBM bands that are actively producing music in this genre. Some examples of contemporary EBM bands include:

This is just a small selection of the many EBM bands that are currently active. There are many other artists and bands who are producing music in this style, and the genre continues to have a dedicated and passionate fan base around the world.

It’s worth noting that EBM is a subgenre of electronic music, and as such, it is constantly evolving and changing. Many contemporary EBM bands are influenced by a wide range of genres and styles, and may incorporate elements from other electronic music subgenres or from other musical styles. This diversity helps to keep the genre fresh and exciting, and allows EBM bands to explore new sounds and ideas.