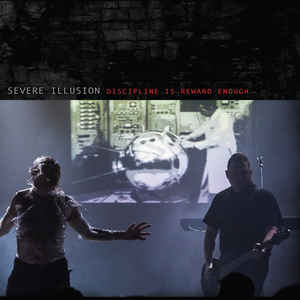 Background/Info: Severe Illusion was founded in 2000 by Fredrik Djurfeldt and Ulf Lundblad. The band released several albums and EP’s on different labels such as PAF Records, DSBP, Khazad-Dûm, Complete Control Productions and a few more companies. They already released one EP (cf. “Armed Revolution”) on Advoxya Records in 2007. I thought that the Swedish EBM duo was finally back on track with their first new album since 2013, but the die-hard fans will notice it’s the title of their first official album released in 2003 on PAF Records.

But this work is much more than simply a re-release. You also will discover tracks originally released on compilations, rare material and even a few previously unreleased songs (that were meant to get released, but which never were) plus 2 live cuts.

Content: The first disc takes us back to the early years of the band and their debut album characterized by a raw and unpolished EBM sounds mixed with industrial elements and multiple noises. The sound is quite retro-like and often reminding to early FLA, but with extra industrial influences on top. This industrial aspect is not that surprising when you know that Djurfeldt is still active in the dark-ambient scene (Analfabetism).

The work sounds minimal, but a bit different from the average EBM production. Next to the industrial elements you’ll also notice space-like bleeps and impressive sound treatments. The vocals are quite ghost-like and in total harmony with the music.

The live cuts feature Seventh Harmonic on the first song and Tecnoman SF. on the next one.

+ + + : Severe Illusion has always been a rather atypical EBM formation carried by classical elements. The industrial noises and experimental treatments make the originality and specificity of this band and that’s an element I really like. The retro-EBM style might appeal to lovers of Frontline Assembly, but first of all to all old-school lovers. I also have always enjoyed the more minimal and somewhat space-bleeping aspect of Severe Illusion. Last, but not least this work is especially interesting for the rarities featured on it. So this is an opportunity to (re)discover their debut work with a lot of extras.

– – – : I was a bit disappointed for not receiving a complete new album and I sometimes think to self ‘who can be interested in re-releases expect the fans’? The atypical aspect of this EBM combo is an element I especially like, but I’m not sure EBM die-hard fans will be totally convinced.

Conclusion: Nothing new although an interesting work because of the many rarities!