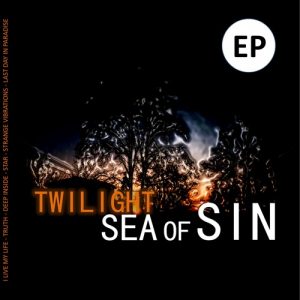 Background/Info: Some of the ‘older’ synth-pop lovers and especially German people will probably remember Sea Of Sin. I remember their debut album “Watch Out!” released in 1995 on Subtronic Records. A next full length entitled “Urban Chemistry” got released in  2000 on Synhtphony Records. The band was pretty close to Camouflage (Heiko Maile producing some of their work). After a hiatus of more than 15 years Sea Of Sin has been recovered from dust and delivered this new EP.

Content: The songs aren’t totally new as Frank Zwicker and Claus Schill revisited their early albums, reworking 3 songs from “Watch Out!” and 2 cuts from “Urban Chemistry”. They added one new cut. The influences are pretty German electro-pop like; which means inspired by Depeche Mode, but transformed into an electro-pop approach reminding German giants such as De/Vision and Camouflage. The songs are elaborated, sometimes revealing a little flavor of melancholia and carried by strong choruses. The new song “Star” is somewhat different and more into a reverie sensation.

+ + + : The old songs have been perfectly reworked and transposed into a refreshing electro-pop format. The production is fully accomplished revealing harmony between verses and choruses. There also is a perfect balance between music and vocals featuring an appropriated and talented singer for this kind of music. The ‘old’ cuts remain excellent synth-pop that will appeal for fans of the aforementioned bands.

– – – : My only regret is the rather poorly inspired new song, which more sounds like a song that has been never released and here serves as a break between the songs from the first- and the second album. Sea Of Sin doesn’t bring anything new, but will please the synth-pop community.

Conclusion: Even if this EP avoids any innovation in a music genre that already counts an endless list of similar bands, this adaptation, from songs that were originally released in the 90s, is quite refreshing and pleasant. Let’s now wait for the real ‘new’ work!