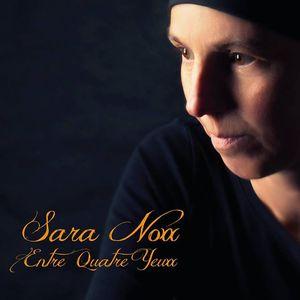 Content: This is the first new album by Sara Noxx since “In(t)oxxication”, which was released now 6 years ago. A few EP’s were released in the meantime, but an album always is something different and more consistent.

Sara Noxx always has been one of our favorites, but I was wondering what this new opus would sound like. It became a very intimate composition without any rhythmic parts, but like a deeply artistic canvas on which this talented artist could transpose her musical poetry. The tracks were written by piano and electronics, but it all remains very minimalistic. I can’t say Sara Noxx moved into neo-classic music, but she found her inspiration in ballads, gothic and probably film music. The music covers the work with a dense melancholic layer, which totally fits to the lyrical content.

The intimacy of the record is probably due to the lyrical content of “Entre Quatre Yeux”. Most of the songs refer to a lost relationship where love has gone forever. It feels sad and sometimes pretty desperate, but written with some elegance and a deep emotional truth. The lyrics are like little stories reflecting real experiences in life. So this album sounds a bit like a creation to exorcize some of Sara’s deepest ghosts.

She sings a half spoken – half sung way, a bit like narrating some of her deepest thoughts although her timbre of voice once more inject this warm breeze of sensuality, which she in a way talks about in “Die Liebe”. She’ll always be linked to Anne Clark for her particular way of singing, but it also remains one of the main strengths of her work.

This album features 17 songs, which all are pretty similar in approach and influences. The piano played songs are the most creative ones, but some of the electro written songs will touch the listener a similar way. The narrating style sometimes reminds me of Goethes Erben so I think it’s not of a coincidence if Sara Noxx already collaborated with this legendary gothic formation.

This work is all into dark reverie and it feels a bit strange to hear dark themes transposing the listener into a fictive voyage throughout his deepest fantasies. “Falling” (still released as EP-song) is one of the absolute masterpiece standing for grace and artistic elegance. This is such a beautiful song. “Inwardly Disintegrated” is another little jewel reflecting love and passion while performed by piano and synths. “Sleepless” is another poignant illustration of this emotionally loaded composition.

Most of the songs are sung in English, but you also will hear a few German sung songs while a few cuts feature French passages.
The limited edition of this album features an extra disc filled with remixes. The entire tracklist of 17 cuts has been remixed by very different bands. This disc sounds like conceived for the clubs and at least that’s what bands like Combat Company and NZ have done. They reworked the original songs into alluring EBM pieces with Sara Noxx’ vocals on top.

There’s a lot to experience on this disc, which can be now delicate thanks to !Distain remixing “Renaissance” and then experimental and even a bit glitch like at “At About Midnight” remixed by Vigilante.

In the gothic vein there’s a well-crafted remix of “Falling” by Age Of Heaven. A song like “Sinking” has been transposed into an epic inspired version by Irrlicht. But when it comes to indicate one of the most beautiful remixes it will be probably “Inwardly Desintegrated” by Uselesssense. I also want to mention two more remixes by Form Follows Function and In Mitra Medusa Inri.

Conclusion: I really recommend purchasing the limited edition of this album, which brings the most intimate and emotional work of Sara Noxx ever and a bonus disc filled with diverse remixes.