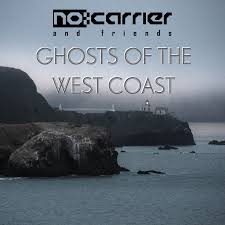 Content: The American duo No:Carrier is a band we got the opportunity to discover by several different releases. The duo is now back with some ‘friends’ unleashing 4 songs, which are mainly covers.

The covered songs are not exactly electro-minded songs, which perfectly fits to the style and influences of this band. “The Boys Of Summer” originally written by Don Henley brings us back to the early 80s and sounds like a rock-wave adaptation featuring Kalib DuArte which reminds me a bit of The Simple Minds.

I personally prefer the upcoming song, which is a cover of “California” featuring Melissa Harding. The original version was performed by Belinda Carlisle. No:Carrier transformed the song into a cool indie-wave-rock driven version with heavenly female vocals.

“Room With A View” is a song from Tony Carey (Planet P Project). The cover version features Lauralee Brown and is one of the least inspired songs of the EP. I don’t have anything against the rather slow tempo, but I’m missing a climax here.

The last song “She Moved Through The Air” features Cynthia Wechselberger and that’s a rather strange mention as Cynthia is part of No/Carrier. This song is a special kind of cover as it has been taken from a traditional (Irish) folk song. It’s a great adaptation featuring heavenly female vocals. It sounds like a mix between ethereal- and cinematographic music and will possibly please fans of Dead Can Dance. I like the final of the song, which embraces a great sound climax.

Conclusion: The concept of this EP is quite original and a bit surprising for the choice of the songs, which are not exactly belonging to the wider list of planetary hits. The result is quite diverse and reflect an intimate interpretation reinforced by the contribution of friends.

Best songs: “She Moved Through The Air”.