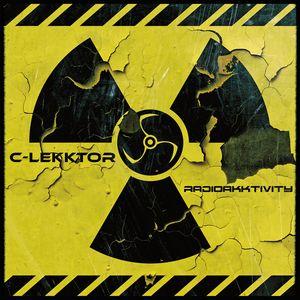 Content: C-Lekktor became one of the absolute leading formations of the Mexican dark-electro scene. This is probably one of the first bands from the past years to come out of Hocico’s shadow.

The last year released “Final Alternativo”-album simply confirmed the growing genius of this typical dark-electro minded band. While all previous productions were released by COP International, the band now joined Digital World Audio (formerly known as Deathwatch Asia) to unleash this digital single, which is also available as a limited 7” version of 200 copies.

The digital format features an extra song, which is this surprising cover version of Kraftwerk’s legendary hit “Radioactivity”. It always remains a big challenge to cover such a megahit, but C-Lekktor did it its very own way by keeping the melody line and empowering the rest of the song with devastating and hard EBM. The song has been transposed into a dark and powerful dance-cut animated by possessed screams and a sweeter melody line reminding us of Kraftwerk.

The “Radio Mix” is pretty similar expect it’s much shorter. There also is a remix of “Radioakktivity” by Noisuf-X. This is an excellent choice as Jan L always delivers pure quality. He accentuated the melody line while transposing the rest of the song into a more familiar Noisuf-X approach. This remix is absolutely worthy of examination as well.

Conclusion: No doubt about it, Kraftwerk lovers will be shocked to hear this cover version, but C-Lekktor didn’t try to emulate this great song instead of creating a very personal format transposing “Radioactivity” into dark EBM.

Since you’re here … … we have a small favour to ask. More people are reading Side-Line Magazine than ever but advertising revenues across the media are falling fast. And unlike many news organisations, we haven’t put up a paywall – we want to keep our journalism as open as we can. So you can see why we need to ask for your help. Side-Line’s independent journalism takes a lot of time, money and hard work to produce. But we do it because we want to push the artists we like and who are equally fighting to survive. If everyone who reads our reporting, who likes it, helps fund it, our future would be much more secure. For as little as 5 US$, you can support Side-Line Magazine – and it only takes a minute. Thank you. The donations are safely powered by Paypal.
Tags: C-Lekktor