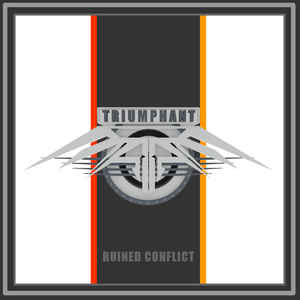 Background/Info: American artist Xavier Morales, better known as Ruined Conflict, is already back on track. This is the fourth full length of artist who has been often compared to VNV Nation.

Content: The title of the album could have been a VNV Nation title as well. The sound and Morales’ timbre of voice once again reminds me of the work of Ronan Harris. VNV Nation clearly sounds as the main source of inspiration although Ruined Conflict experimented with something more personal on the previous work “A Voice For The Voiceless” (2016). This album revealed furious guitar playing on top of the future-pop approach.

“Triumphant” rather sounds as a move back to the ‘sources’. The songs are pure future-pop driven mixing danceable rhythms and melodic passages. The vocals are passionate. I also notice an instrumental piece, which is more evasive and into the vintage electro-style of Jean-Michel Jarre. Another interesting cut features some psychedelic guitar passages.

+ + + : Speaking for myself I definitely prefer this new work instead of the previous album. It’s not as original, but more efficient. This is the contemporary future-pop style, which remains somewhere in between EBM, electro-pop and a very personal and somewhat old-school approach by Xavier Morales. The album is produced in a professional way while you also will notice several brilliant and efficient songs. This album stands for passion and a great writing.

– – – : The only and probably single reproach I can imagine is the lack of originality. It’s not exactly a copy-paste edit of VNV Nation, but Ruined Conflict is pretty close in sound and vocals.

Conclusion: I guess there’ll be always a discussion and controversy about so-called ‘copyists’, but the main thing is to get a good and accomplished work. That’s precisely what “Triumphant” is all about and the title speaks for itself: this is the best Ruined Conflict album to date!