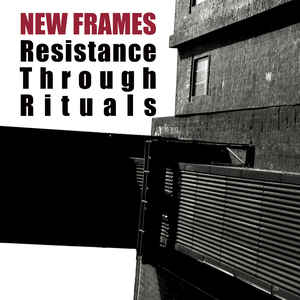 Background/Info: New Frames is one of the latest signings on Hands although featuring an old servant from the industrial scene. Mathis Mootz (Panacea, M² ao) joined hands with Berliner artist David Frisch to unleash the debut album of New Frames. It’s quite a long time ago I heard some ‘new’ work from Mathis Mootz so I was really wondering how this album sound.

Content: It all starts with a dark, industrial spheres rapidly joined by multiple sound treatments. Quite progressively the kick becomes harder and more danceable. The sounds and atmospheres remain pretty dark while sometimes a bit trance-like. Quite progressively you feel the need to start dancing on transcendental techno vibes.

But this work is not just ‘techno’. It’s an intelligent and modern approach in industrial music or a dark exposure of techno.

+ + + : New Frames has found the perfect balance between techno and industrial. But the work is much more than simply a crossover. It’s an intelligent composition exposing an endless sonic spectrum of sound manipulation and harsh, devastating treatments. Mathis Mootz hasn’t lost nor his genius of composing neither his creative spirit to innovate. Some tracks are moving on the edge of trance, some atmospheres excel in icy sound treatments are pretty apocalyptic while a few passages are into experimentation, but the entire work reflects the beauty of creation.

– – – : The single point of discussion might be the techno orientation of the work. Some industrial lovers will maybe get have difficulties realizing this is still industrial music.