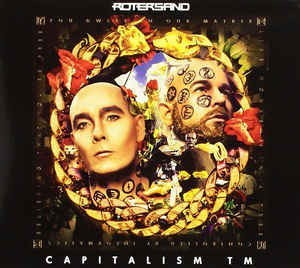 Background/Info: “Capitalism TM” is the fifth full length album of Rotersand, but also their first new album since “Random Is Resitance” (2009). Krischan Wesenberg and Rascal strike back with an engaged new opus, which in a way wants to be a reflection about our ‘capitalistic’ world and way of living.

Content: Rotersand sounds like they never have really disappeared. Krischan Wesenberg remains a true sound wizard who feels comfortable with all ingredients he’s using. From some future-pop reminiscences (which remains the sound where it all started for Rotersand) towards pure EBM arrangements towards trance structures this new work has a lot to offer.

But the main strength of the work is not exactly the influences and genres that have been revisited, but a true passion for sound creation. “Capitalism TM” sounds like having composed in a sound laboratory and accomplished with an overwhelming production process.

The vocals perfectly match with the kind of music and power running through the album. So in the end it all sounds like a typical and new impressive Rotersand production.

+ + + : Rotersand is not just dealing with EBM and different pop elements, but it’s  intelligent and mature writing. The production reveals multiple monstrous sound treatments and detailed noise manipulations. The debut tracks are absolutely astonishing revealing outstanding cuts like “Torn Realities” and “Monopole”. You’ll find a few similar cuts in the final part and I especially want to tip “You’re Nothing” as an attention grabber. But Rotersand also excels with a few softer cuts and I was especially intrigued by “Welcome Home”, which sounds a bit like an electro adaptation of a David Bowie song.

I also have to say a word about the great artwork of this album.

– – – : Some might say that Rotersand is not reinventing itself, but do they really have to? Speaking for myself I can’t really point out one major minus point although I’m not that fond of the future-pop touch running throughout a few cuts.

Conclusion: Rotersand took the time to accomplish a new masterpiece and “Capitalism TM” can really compete with their best albums to date. This work mixes brilliant songwriting together with intelligent lyrics.