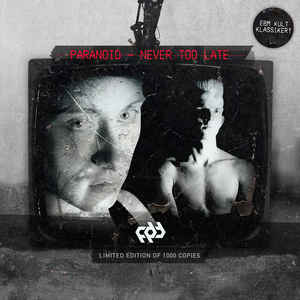 Background/Info: Set up in the late 80s and active till the early 90s Paranoid definitely was a praised and recognized EBM formation. Driven by Michael Formberg (music) and Stephan Tesch (vocals) the band released 2 great albums. Infacted Recordings already picked up Paranoid for its famous “Classics Series” releasing the album “I Still Dominate You” (2011). This new volume gets back to the second album “Sweat Blood & Tears” plus the EP’s “Desire” and “Love And Hate”. A few rare and previously unreleased tracks have been featured as well.

Content: Paranoid was 100% EBM and remains –even more than 20 years later, a great sensation. Inspired by bands like DAF and Nitzer Ebb they however built up an own sound identity, which came more through on “Sweat Blood & Tears” and the EP released around the same period.

Next to the hard-hitting EBM vibes they also injected a more melodic ‘pop’ touch on top of the composition. “Never Too Late” is a mix between merciless old-school EBM and body-pop music. Among the rare and previously unreleased songs you’ll find a few live songs and alternative mixes plus a surprising live version of the Madonna-song “Dress You Up”.

+ + + : Paranoid is definitely a band the world-wide EBM community is missing. They were active during a rather short lapse of time, but left us some essential songs in the genre. Notice by the way it also was a solid live band. This album brings us back to great cuts such as “Love & Hate”, “The Arrow In My Heart”, “As Much As I Can”, Beat The Rest” and the somewhat body-pop mixed “You Sowed Love” and “My Destiny”.

If you like menacing bass lines, commanding vocals, icy and melodic synth structures and danceable kicks empowered by metallic percussion you definitely will like this album.

– – – : The live cuts are cool, but not that essential. The rather poorly sound quality is somewhat ruining the rest of the album although fans will not care about it.

Conclusion: I guess this will be the last volume from Paranoid in the Infacted “Classics Series”. I still enjoy this formation as much as during the years they were active.