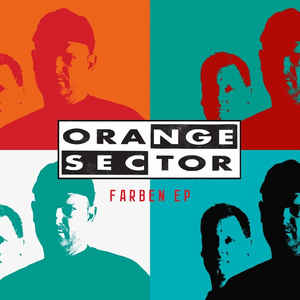 Background/Info: “Farben” is the final EP of a trilogy. After “Monoton” and “Stahlwerk” the German EBM duo strikes back with a new title song and some extra exciting cuts plus remixes. Lars Felker and Martin Bodewell are now EBM veterans who can look back on a serious and successful discography.

Content: The title song is a classical EBM-cut in the purest tradition of Orange Sector. It sounds hard and merciless and driven by the usual, dry bass line and shouting vocals. The most surprising song of the EP definitely is the new version of “Götter”, which was originally released in 1994 (!) on the “Flashback”-album. It remains one of the all-time hits of the band and has been reworked/remixed into a new hard-cutting version. There are two new versions of this song featured on “Farben”.

Both cuts left are like reflecting an intimate side of the band, which are miles away from the hard EBM assaults. “Heute Liebe Ich Dich” reminds me a bit of late DAF and is a cool B-side cut.

The final part features remixes by Ad:Key, Zoon Politicon and Blitzmaschine plus an extra (re)mix of “Farben”.

+ + + : Orange Sector remains a 100% guarantee for great and merciless EBM. “Farben” is just one more cut in the genre. The simple effect of the bass line and the hard rhythmic plus commanding vocals will get you on the dancefloor. It’s also cool to discover ‘new’ mixes of “Götter”. An EP is the right place to bring old songs/hits to life and no doubt about it, the fans will love it!

– – – : The softer B-side tracks are interesting and well-crafted, but definitely not the most convincing side of Orange Sector. We like this band when kicking hard! “Farben” stands for this kind of approach although it’s not the greatest hit from the band’s body of work.

Conclusion: You always will find irresistible cuts on each Orange Sector release. Together with the previously released EP’s this new work completes a cool EP-trilogy.