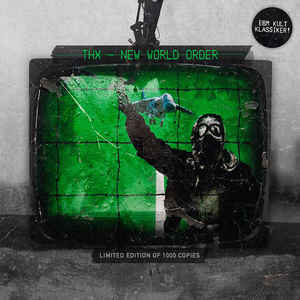 Background/Info: THX was a German duo active during the early 90s. Driven by Peter Schmidt producer Andy Düx the band released one full length album (cf. “Living In Purgatory”) and two 12”. The songs of the band have been now released on a new full length album in the famous “Classics Series”.

Content: THX was mainly recognized in Germany so this album definitely is a way to get back to a fascinating electro formation dealing with an intelligent and sophisticated EBM format. The songs are driven by slow rhythms and half spoken half sung vocals. You directly notice the late 80s – early 90s EBM approach reinforced by multiple spoken samplings, Gregorian chants and cold synthesizer parts.

THX deal with a minimal EBM format, which sometimes reminds me of Sleep Chamber in an electronic edit. It sounds simple and yet pretty complex.

+ + + : THX was not the typical EBM formation. Their sound was a kind of alternative to classical body music. It was more spooky and into poignant, icy atmospheres. This band composed a unique style of music and is the kind of formation which had a visionary approach. Next to the 8 original tracks you’ll hear 6 cool remixes. The songs have been remastered, giving them a new life and a new opportunity to ravish young EBM lovers.

– – – : The sound formula of THX is a fascinating one, but in the long run rather repetitive and even predictable. But let’s not forget these songs were originally released in 1990 and 1991. The different (re)mixes don’t really add a bonus compared to the original versions.

Conclusion: Infacted’s famous “Classics Series” has featured numerous famous bands from the 90s, but also a few ‘forgotten’ treasures. THX has been recovered from the dust and that’s a real good idea!