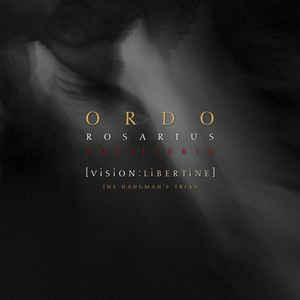 Background/Info: Ordo Rosarius Equilibrio for sure is one of the most atypical bands active in the scene. They don’t really belong to one established scene, but simply bring influences together from different genres. We had to wait 6 years for a new full length, which finally saw the light of day as a double disc while originally meant to be an EP. Notice by the way that the Swedish duo Tomas Pettersson – Rose-Marie Larsen got some help from Belgian tribal and ambient artist Sal-Ocin (Empusae).

Content: This new work is the perfect symbiosis between multiple and rather opposite influences. The good-old neo-folk inspiration is still noticeable while the electro-pop input has become more explicit. The songs have been achieved by impressive epic arrangements, a solid and sacred kind of ritual atmospheres and the familiar explicit lyrics, which you better not expose to young and sensitive listeners.

There’s a constant darkness hanging over this album while Pettersson’s narrative style of singing increases the intrigue. The explicit lyrical content sounds pretty ritual-like and makes you feel like you are witnessing a strange and pornographic rite. The slow cadence accentuates the ritual and sensual character of the work.

The 2nd album will rapidly make you realize that the 1stdisc was nothing less than a preliminary experience. “[Vision:Libertine] ” leads the listener quite progressively into an orgasmic climax. The provocation has been refined by beautiful choruses while a few backing vocals by Rose-Marie will make you more confident about the final issue of this work.

+ + + : This is without a shadow of a doubt the most artistic and beautiful album of this band ever. The mix of different influences has been produced into a real compact, visionary and overwhelming result. There’s a constant duality running through the work, but every little piece and element of the production appears to be an essential aspect of a wider entity.

– – – : I can imagine this is not exactly the most accessible release for classical pop lovers. It for sure must be a blasphemous exposure of pop music.

Conclusion: Ordo Rosarius Equilibrio had to enter into Dante’s ‘Inferno’ to compose this kind of work. This is pop music from a new order; the place where classical electro-pop music has been sacrificed at the altar of perversity by a refined s/m hangman. “[Vision:Libertine] The Hangman’s Triad” is without a shadow of a doubt one of the absolute masterpieces from the year 2016!

Best songs: “Holy Blood, Holy Union”, “Vision Libertine (The Magnificence Of Nihilism)”, “The White Rose Of Dysphemism”, “The Misanthropic Polygamist (How Gods Dream)”, “Snow-White Were The Stains And Paraphilia Was Her Name”.

Since you’re here … … we have a small favour to ask. More people are reading Side-Line Magazine than ever but advertising revenues across the media are falling fast. And unlike many news organisations, we haven’t put up a paywall – we want to keep our journalism as open as we can. So you can see why we need to ask for your help. Side-Line’s independent journalism takes a lot of time, money and hard work to produce. But we do it because we want to push the artists we like and who are equally fighting to survive. If everyone who reads our reporting, who likes it, helps fund it, our future would be much more secure. For as little as 5 US$, you can support Side-Line Magazine – and it only takes a minute. Thank you. The donations are safely powered by Paypal.
Tags: Ordo Rosarius Equilibrio