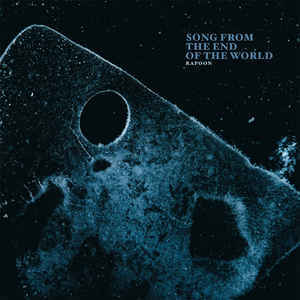 Background/Info: Robin Storey will be forever linked to his previous formation Zoviet France although Rapoon for sure gained a similar recognition. Storey has been releasing under the Rapoon moniker since the early 90s and has released an endless discography. “Song From The End Of The World” seems to be the first Rapoon-album from 2016.

Content: Robin Storey has been inspired by ecology and the danger behind the melt of the Arctic ice mass. It’s a dark and apocalyptic theme, which unfortunately might even become reality. The abstract and experimental soundscape created by Rapoon will not become the most efficient ecologic weapon to bring politicians and all humans aware of this danger, but it’s an interesting and important theme. Music also is the ultimate way of expression for an artist like Robin Storey to express his feelings about the subject.

He transposed and eventually exorcised his thoughts throughout a unique ambient sound experience made of mysterious moods, manipulated noises, echoing sound, buzzing sound waves and even a kind of ritual-minded vocal parts. It’s not the typical dark-ambient experience, but an intriguing creation filled with an entire arsenal of noises and sound treatments. Some parts are touching real freaky ground while other passages are more into a kind of sterile reverie even featuring a sad, melodic element.

+ + + : The main strength of the album is the ambient diversity, which is totally different from the usual standards. I like the diversity and the elaboration of the work.

– – – : The somewhat abstract and experimental approach is not always the most accessible element of the album while I can imagine some fans will miss the tribal touch Rapoon has often created.

Conclusion: “Song From The End Of The World” is a kind of imaginary requiem for a day, that will hopefully never come true. It’s a poignant testimony from a brilliant, visionary artist!

Best songs: “A Prophecy Lies Under”, “A Sky Beckons Down”, “The Sky Dances In Green”.