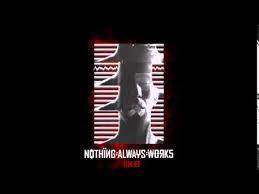 Background/Info: Nothing:Always:Works is a project set up early 2015 by Alexandre Abrunhosa. Operating from Porto (Portugal) this artist was previously involved in different projects and now moves on as solo artist.

“In It” is the first exposure of the band and only reveals one single song.

Content: “In It” is a pretty cool track for the judicious and powerful mix of electronic treatments and industrial-like guitar. The sound is quite rough and unpolished while the vocals reveal a zombie-like timbre of voice.

+ + + : There’s a nice twist between guitar and electronic bleeps.

– – – : One single track is not exactly the most efficient way to catch a wider audience.

Conclusion: One song is not enough to get an idea about a new band’s potential, but “In It” tastes like more so I hope there will be a next –and more consistent, work.