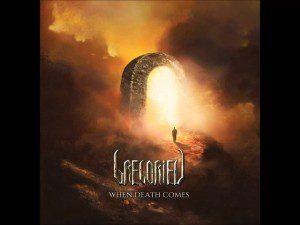 Background/Info: Gregoriev is a solo-project set up by Polish multi-instrumentalist Grzegorz Morawski. He was previously involved in different bands, but has now set up his own project to unleash this self-released debut album inspired by Jonathan Carroll’s novel “From The Teeth Of Angels”.

Content: Morawski clearly explores different genres, which are moving from metal to gothic and dark-rock music. One of the main characteristics for sure appears to be the solid guitar solo parts revealing his metal background.

A few tracks are moving into darker depths and feel like evoking distant influences of The Sisters Of Mercy and The Mission. These cuts are cool, but Gregoriev appears to be a project of many talents.

The somewhat dark-rock minded passages are quite well-crafted as well while the final track reveals epic arrangements.

The production of the vocals is quite diverse as well. Gregoriev mixes deep growls and pure enraged passages while the opening cut features female backing vocals.

+ + + : The diversity of the work is a quite noticeable element while Gregoriev sounds like feeling comfortable experimenting with all the influences.

– – – : Gregoriev doesn’t really belong to one specific and established music genre, but simply brings genres together. That’s rather cool, but maybe not the best formula to catch the attention of a label.

Conclusion: It ain’t too bad while there’s some potential hiding inside this band, which I hope will come through on their future work.