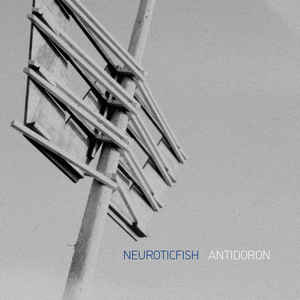 Background/Info: Neuroticfish was set up in 1995 and made some real successful productions during the glorious days of future-pop. After the “Gelb”-album (2005) it took 10 years to Sascha Mario Klein and Henning Verlage to fight back unleashing the “A Sign Of Life”-album in 2015. “Antidoron” is the band’s fifth full length in history and definitely one of the major releases from late 2018.

Content: Neuroticfish is a band, which is easy to recognize and that’s especially because of Sascha’s great timbre of voice. Sound-wise the band has seriously evolved since the early years. The tracks are no longer carried by the sweet-melodic ‘clap your hands’ tunes of the future-pop days. You still will recognize some early elements and the melodic approach, but “Antidoron” can be easily considered as the hardest work of Neuroticfish to date. There’s a nice twist between ‘harder’ cuts another ‘softer’ songs.

+ + + : I’m not saying that Neuroticfish has reinvented its sounds; it’s more about an evolution and the exploration of new elements. Composing a new “No Instruments” or “Les Chansons Neurotiques” would be no big deal. The duo brings us some punchy cuts (cf. “Fluchtreflex”, “Honesty”, “What Is Wrong”) made with great sound treatments and driven by passionate vocals. I also noticed harder and more sophisticated drum sections. “What Is Wrong” definitely will become a new hit! The songs still have this great melodic part, which will appeal for all electro-pop lovers. But I also have mention “Hold Of Me”, which is a ‘softer’ song, but a real accomplished, sensitive and beautiful cut.

– – – : A few other soft songs aren’t not exactly the most convincing ones, but they bring a kind of break in the tracklist.

Conclusion: Neuroticfish will always be reminded for some of their early hits, but this opus reveals a few new and harder cuts, which I think have the potential to become club killers as well.