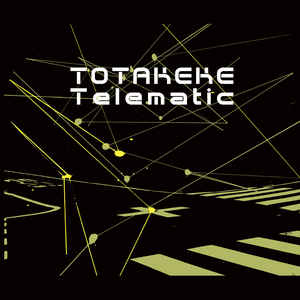 Background/Info: Frank Mokros seems to have taken a break with Totakeke. Active since 2003 this new opus took him 4 years to get accomplished. “Telematic” is the ninth full length of the American musician.

Content: “Telematic” seems to feature 2 sides. The first part (first tracks) is dominated by hard-industrial beats, sound manipulations, different little noise and a very sophisticated composition close to IDM. The tracks have been progressively built up.

The second part of the album (last tracks) is definitely more into an experimental vein. It seems a bit like Frank Mokros mainly focalized there on sound creation and transforming noises into something exclusive. I also noticed fragmented female vocal samplings on one of the cuts.

+ + + : Mokros became a real expert in creating great sound treatments. It has been always one of his main trademarks and this new opus simply confirms this talent. He demonstrates it by impressive noisy sequences, heavy industrial bounces and especially the way he composes his song structures. There’s a kind of natural flow running through the tracks, but it’s mainly based upon a sophisticated format made of intelligent sounds. “Asphalt” is a phenomenal track with amazing, aggressive sequences. “Sideband” is another attention grabber for its subtle technoid input.

– – – : The first four cuts are absolutely great, but I’m less convinced by the last four cuts revealing a strong experimental taste. It sounds a bit like two different albums in one.

Conclusion: Totakeke belongs to these avant-garde artists from the industrial scene. This album has its highs, but still its lows, unfortunately.