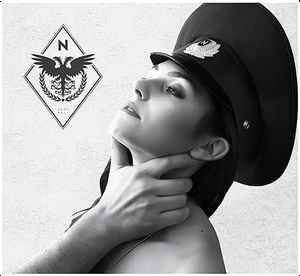 Background/Info: Nachtmahr was set up in 2007 by Thomas Rainer. The Austrian musician was the creative spirit behind the successful L’Âme Immortelle while he also was the instigator of the electro-industrial Siechtum. Nachtmahr was a kind of get back to harsh dark-electronics and became in no time a new dance sensation. “Unbeugsam” is a kind of 10 year anniversary release celebrating one decade of dance terror, one decade of Nachtmahr.

This double disc features 34 tracks featuring the most essential hits, but also a few rarities and even 2 new cuts. Nachtmahr has also been a band with a strong and controversial image, somewhere at the edge of controversy, but here again Thomas Rainer fully succeeded in his goal.

Content: “Unbeugsam” goes back to the early work of Nachtmahr reminding us of the original sound of the band, which back in time was somewhere linked with other ‘new’ projects in the genre like Noisuf-X and Reaper. The music was made of harshness and pumping kicks. Somewhere inspired by industrial treatments and carried by melodic strings, the songs always have been driven by the merciless and harsh –mainly in German sung, vocals of ‘Tanzdiktator’ Thomas Rainer.

This is a way to get back to mega-hits like “Katharsis, “Feuer Frei”, “Can You Feel Beat?”, Strenge Liebe”, “Mein Name” and the already evoked “Tanzdiktator”. Seven albums have been released and “Unbeugsam” is an opportunity to rediscover the hardest cuts of this band’s career.

The 2nd disc lets us discover 2 new cuts, which are in the same, hard and merciless dance style as all the previous hits. The rarities are mainly getting back to the numerous EP songs of Nachtmahr and here again you’ll (re)discover essential pieces.

+ + + : This is a great ‘best of’ perfectly summarizing the impressive discography accomplished in 10 years. The hardest cuts have been taken, which also remain the best exponents of this Austrian formation. It also confirms the great composing skills of Thomas Rainer, which perfectly mixed rough and blasting kicks with constant, carrying melody lines. Thomas Rainer remains a great melody maker. The album also features 2 impressive booklets with familiar illustration material, sometimes provocative, often sexy and definitely controversial.

– – – : All songs are pretty blasting and in the long run creating a little less saturation although I guess the fans will not complain about it.

Conclusion: Some Nachtmahr releases sometimes made me think that the image became more important than the music, but this ‘best of’ gave me hard smack in the face confirming the amazing writing skills of this project.