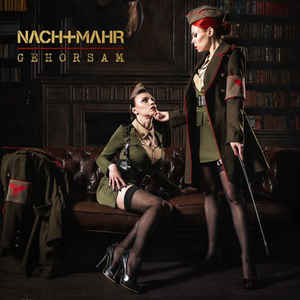 Background/Info: The upcoming Nachtmahr-album “Antithese” is the pipeline, but this EP brings us a teaser from what we’ll maybe have to endure. Thomas Rainer already strikes back with this new EP featuring next to the title song 5 remixes.

Content: “Gehorsam” clearly sounds as a move back to the origin of Nachtmahr. In times of “Kunst Ist Krieg” and “Katharsis” Thomas Rainer took the dark-electro audience by surprise, revealing a different kind of music. Hard-bouncing beats, icy electro-industrial sequences and explicit samplings were the main elements of the instant success story of this project. Later on the music became more ‘classical’, being not that different from other dark-electro bands, but focused on a strong and somewhat ‘shocking’ image.

“Gehorsam” is a track that moves back to the early magic of Nachtmahr. Remixes have been accomplished by SynthAttack, Chainreactor, DKAG, Alien Vampires and Stromtod.

+ + + : Nachtmahr hasn’t reinvented its sound, but simply moved back to the point where it all started. And that’s an interesting move as the early magic is suddenly coming alive revealing one of the best Nachtmahr songs in years. No doubt about it, the dancefloors will be conquered! Among the remixes I especially want to mention the one by Alien Vampires, which has something totally different, a bit experimental, but definitely exciting. SynthAttack did a great job as well. No need to say the artwork is once again illustrated by sexy girls in uniform.

Conclusion: The question is now if “Antithese” will be a total move back to the beginning of Nachmahr? I sincerely hope there’ll be more songs like “Gehorsam” featured on it.